Melanie Martin has been taken into custody and is being held on $50,000 (£40,300) bail following an alleged altercation at the 'I Want Candy' singer's California home.

AceShowbiz - Aaron Carter's ex-girlfriend has been arrested on suspicion of domestic violence following an alleged altercation at the singer's California home.

Police were called to the 32-year-old's Lancaster house on Sunday night (March 29) to investigate a disturbance, which reportedly began as a heated argument between Carter and Melanie Martin.

According to TMZ, the fight turned physical and Martin is accused of attacking the star, leaving him with scratches on his arms.

Carter has since taken to Twitter to share his side of the story, claiming the incident occurred after he called it quits with Martin, whom he also accused of purposefully breaking her dog Peanut's leg.

"Melanie came back four times after we broke up harrsssing (harassing) me and came back with peanut tell me sometime during the day SHE had broken her dogs leg (sic)," he wrote. "police asked if I could get her dog to a relative so I safely. Delivered the animal to her mom (sic) #PrayForPeanut #FelonyMelanie." 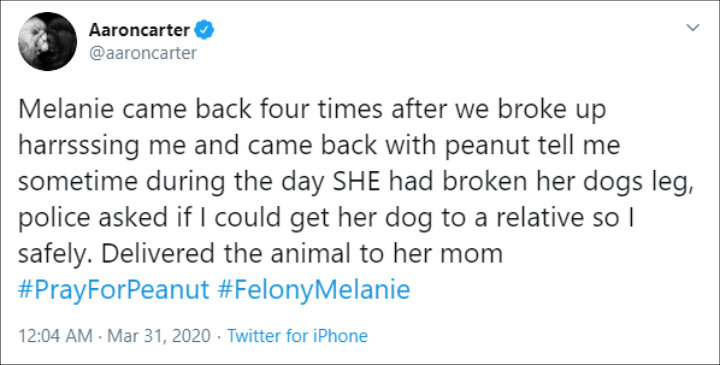 The singer went on to share a link to the TMZ article about Martin's arrest, and in a subsequent series of tweets, explained the romance ended because of her infidelity.

"so sad," he wrote. "I hope she gets the help she needs. no one deserves domestic abuse female OR MALE #DomesticAbuse #Cheater she literally chocked (sic) me out.... i'm devastated."

"I hope she gets the help she deserves. I tried to give her a new life," he continued, insisting his heart is "broken" after the end of another troubled romance. 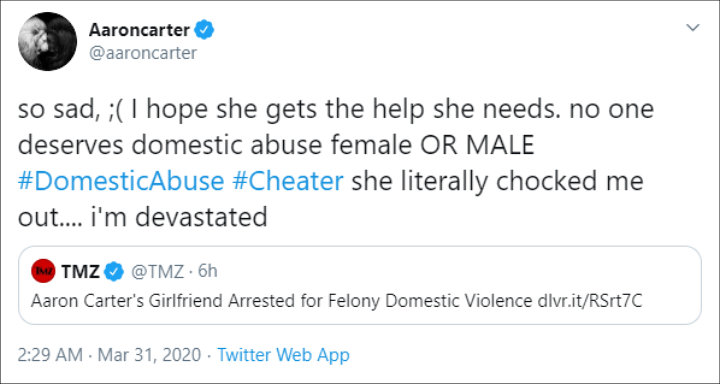 Referencing his messy 2019 split from Lina Valentina, who allegedly threatened to stab Carter several times, he tweeted, "another girl putting her hands on me when I try to break up with them for cheating on me.its f**ked right now and so is my heart (sic)."

While Carter received messages of sympathy from fans, other social media users took the opportunity to question the star's claims, alleging he is "playing the victim" when he is really the abusive one in his relationships.

Firing back at the Twitter trolls, he fumed, "I'm not in jail for felony assault with animal control looking for my dog because she (Martin) broke its leg and didn't take it to the hospital #FelonyAssault (sic)."

Ironically, the break-up drama comes less than a month after Carter had 'Melanie' inked on his forehead, in tribute to his love.

He had also been spotted shopping for engagement rings after going public with the romance online earlier this year.

Prince Charles Out of Quarantine Seven Days After Coronavirus Diagnosis