Aside from responding to her former co-star's controversial remarks amid the pandemic, the 'Lost' actress offers update on castmate Daniel Dae Kim's condition as he recovers from the virus.

AceShowbiz - Pregnant actress Maggie Grace has turned on her former "Lost" castmate Evangeline Lilly for controversial remarks she has made about the coronavirus crisis.

Lilly, 40, upset fans and critics alike earlier this month when she revealed she was refusing to heed self-quarantine guidelines amid the pandemic, explaining she valued freedom over life.

Grace, who like Lilly was an original member of the Lost cast, has now added her name to the list of people taking aim at the actress, suggesting the guidelines are not a test of freedom but a way of keeping the most vulnerable members of society safe.

"There's no need to panic, but at the same time this is about all of us - the vulnerable, the immunocompromised, older folks," Maggie wrote on social media on Wednesday, March 25. "Sure, it's a free country, but how about choosing to exercise some of that wonderful freedom to have some compassion, trust the extensive science here and not overwhelm (the) health system."

"No doctor should have to choose which patients get life saving care and which patients get sent home to die - the sort of triage that is tragically happening in Italy right now. Think about how these small decisions effect (sic) your dad and those in your community as ventilators run out."

Poking fun at Lilly's decision to take her kids to a gym class last week - a move that left many scratching their heads - Grace adds: "Your kids will be fine without gymnastics, I promise. Be well." 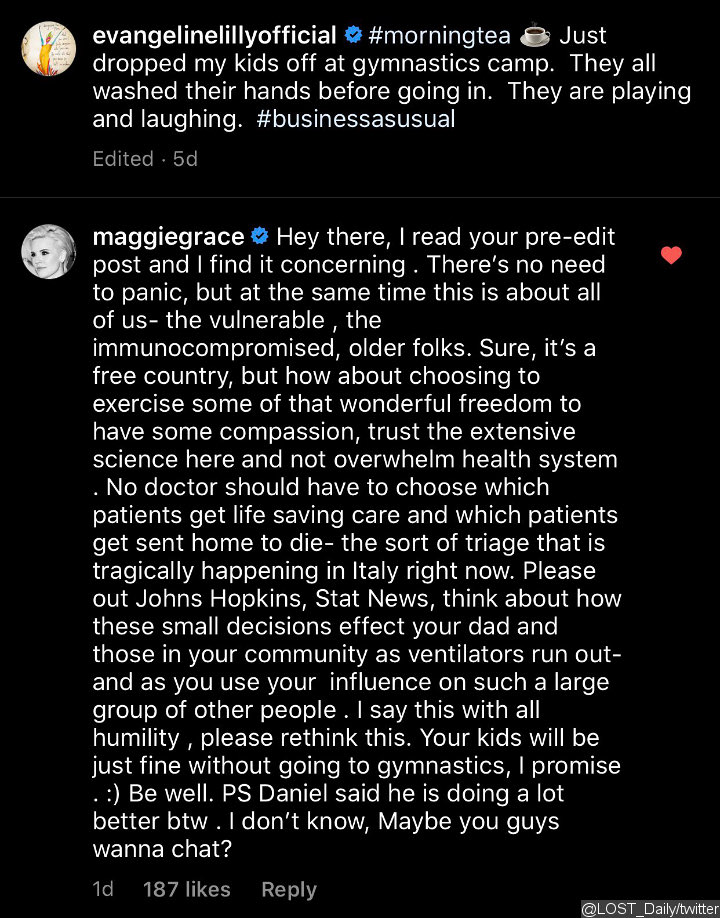 Maggie Grace poked fun at Lili's decision of refusing to isolating herself amid Coronaviru.s

Maggie also gave an update on another "Lost" castmate, Daniel Dae Kim, who has just left quarantine after testing positive for the coronavirus.

"Daniel said he is doing a lot better btw (by the way)," Grace wrote, joking that perhaps Lilly should speak to him: "I don't know, Maybe you guys want to chat?"