Prior to this, the 'High School Musical' actress faced backlash after she stated on social media that it was 'inevitable' people are going to die as a result of the global pandemic.

AceShowbiz - Vanessa Hudgens has donated to Bethenny Frankel's coronavirus disaster fund, after hitting headlines with her "insensitive" remark about Covid-19.

"The Knight Before Christmas" star faced backlash earlier this month (Mar20) when she stated it's "inevitable" people are going to die as a result of the pandemic.

She later apologised for the comment, admitting the response had been a "huge wake up call about the significance" of her words, and took to Twitter on Tuesday night (24Mar20) to reveal she'd given money to reality star Bethenny's campaign to raise money for masks and other hospital supplies amid the pandemic.

"I'm joining @bethenny and @theellenshow by donating money to help fund the purchases of masks and other supplies for various hospitals. If you're able to help, here's the link to join," Vanessa wrote. 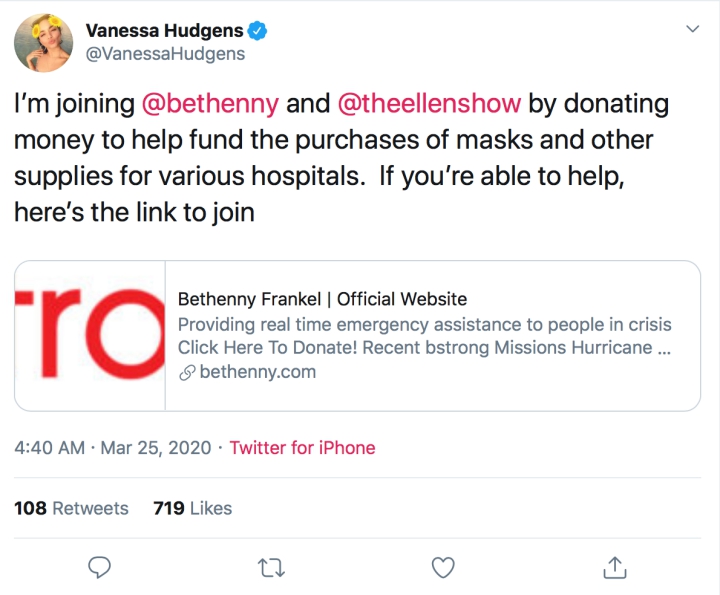 While Bethenny thanked the actress for the donation, others were less complimentary about the move, and Vanessa's decision to share it so publicly.

"Trying to pay for words u can’t take back..." one wrote, while another added: "What happened to 'People are gonna die but it’s like, inevitable.'"

Another urged fans to be more forgiving, writing: "Actions are more important than words, guys. At this point, people who are not able to forgive are the ones showing their 'true colours'."