A video of the Denver Nuggets point guard getting an oral sex from his girlfriend, Harper Hempel, is shared on his Instagram Stories, though he is quick to delete the clip.

AceShowbiz - Celebrities becoming victim to social media hacking is nothing new, and Jamal Murray has become the latest star to fall victim to vicious hackers. On Sunday morning, March 22, the NBA star found his name trending on social media after an NSFW video was posted on Instagram Stories.

Jamal later briefly deleted his account, though many people have already seen the content of his IG Stories feed and couldn't help but comment on it. Thus, his name started trending. "sources out of Denver confirm nuggets guard Jamal Murray Has just tested positive for Wildin out on the gram at 3 am," one joked.

"Jamal Murray before posting that video on his Instagram story," one other said, along with a video of a woman smoking cracks. "Jamal Murray out here getting that SLOPPY TOPPY from a bunny while in quarantine, maybe he's not a fraud at all," another commented.

"Woke up seen Jamal Murray Trending .. thought he had The Rona but he was jus getting some late night bop from his lady & posted it by accident," someone else commented. "I wake up and see Jamal Murray wilding on IG with a shnow bunny," one more person wrote.

Jamal himself has since responded to the hacking. Taking to his Twitter account, he said, "First and foremost I would like to apologize to my fans. My account has been hacked, currently working on the issue. Thanks." 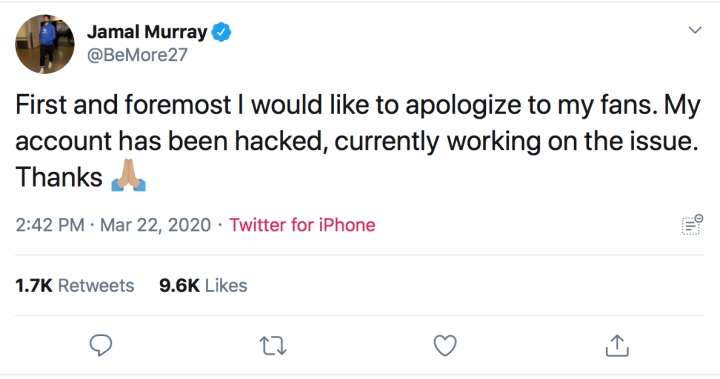 His girlfriend, Harper, has also broken her silence, urging everyone who re-posted the video to delete it.