Presley previously posted a new tat design that saw Los Angeles Dodgers' logo etched on his left cheek on his social media account only to set the record straight that the so-called ink was just a 'filter.'

AceShowbiz - Cindy Crawford and Rande Gerber could not seem to stop worrying about their son. Shortly after Presley Gerber debuted a fake new face tattoo, the supermodel and her businessman husband were reported to have considered their son's actions as a way of him to seek "attention."

"It's tough for them to see and has caused great concern. They know these statements are some kind of cry for attention or help," an insider told E! News about how Cindy and Rande reacted to Presley's recent antics. "But Presley is an adult and is finding his place."

"In a perfect world, this is not the way that they would choose for him to express himself. But they feel they have to be there for him and to support him as much as possible as he figures things out," the source went on. "They want him to be happy and to be who he is. It's a painful process and hard time, but they love him and are always there for him."

Explaining that Presley "doesn't know what he wants to do or who he wants to be," the insider noted that the 20-year-old model also "doesn't know where he fits in." The source further elaborated, "He's going through something and wanting to do things his way without anyone telling him what to do or how to be."

This was not the the first time Cindy and Rande were left concerned about Presley. Back in late February, a source told E! News that their son has put their family in a tense situation. "They want to make sure he's in a good mental state and are closely watching him," the source spilled. While sister Kaia Gerber has "taken him under her wing", the effort was said to be fruitless since he "has a mind of his own."

Presley's latest troubling behavior came to public view on Tuesday, March 17. Through Instagram, the male model posted a "colorblind" photo of him with the logo of Los Angeles Dodgers covering his right cheek. Many were quick to think that he has added another tattoo to his face since he already had the word "misunderstood" permanently etched below his left eye. 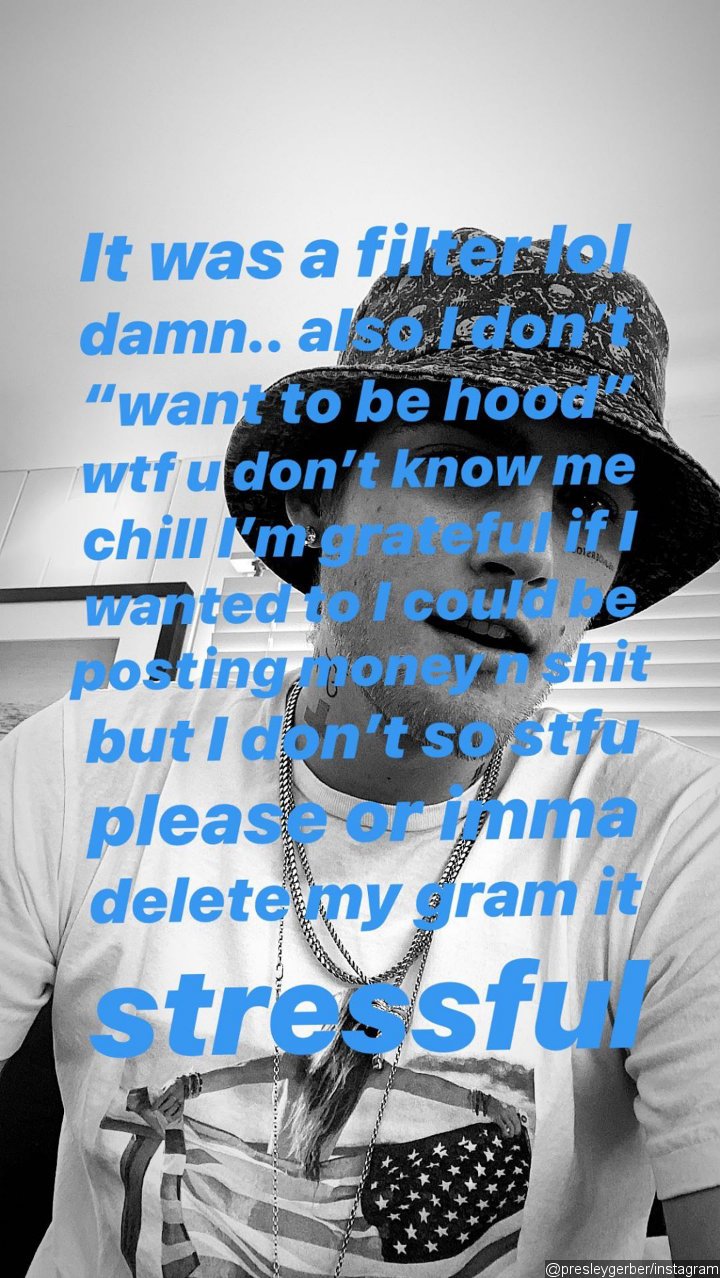 Noticing that many reacted negatively towards the face design, Presley set the record straight via his Instagram Story handle."It was a filter lol damn...," he wrote over a photo of his ink-free right cheek. "also i don't 'want to be hood' wtf you don't know me. Chill I'm grateful. If I wanted to I could be posting money n s**t but I don't so STFU please or imma delete my gram it stressful."

Supermodels' Kids Who Are Following Their Famous Parents' Footsteps