The 'Girls Need Love' singer has wiped her Instagram page clean after being blasted online for posting a fake video that links Chinese people's behavior to the spread of the lethal virus.

AceShowbiz - Summer Walker may need to consider to do some fact checking before using her social media platform to spread news. The R&B singer has been slammed by her followers after apparently blaming Chinese people's behavior for the Coronavirus outbreak.

The 23-year-old posted on her account on Tuesday, March 3 a video which falsely links Chinese people's hygiene issue with the spread of the lethal virus. In the clip which is titled "People in China Seen Spreading The Coronavirus to The Public," some apparent Asian guys are seen using their saliva to clean the wall of elevators in two different occasions.

In another moment, a woman is featured sneezing so hard in front of the panel of an elevator. Responding to the headline and the seemingly supporting video, Summer wrote in the caption of her post, "That's some trifling nasty a** s**t." 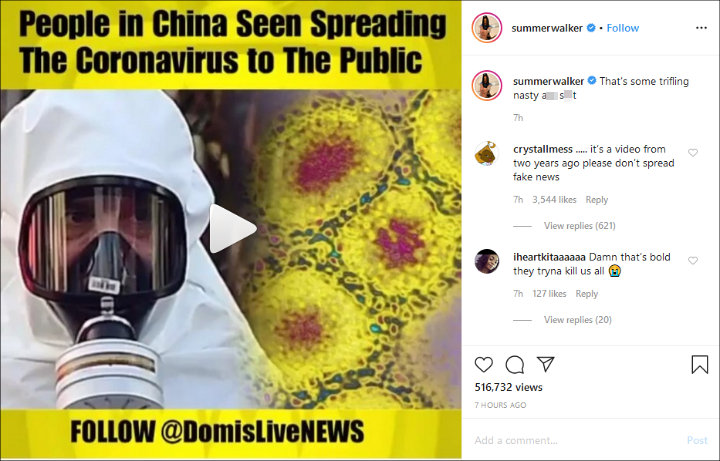 But as some of her followers pointed out, the video that she re-posted was apparently taken two years ago and had nothing to do with the Coronavirus outbreak. "it's a video from two years ago please don't spread fake news," one notified her.

"can you please stop spreading propaganda on your very large platform. It's getting pretty bad at this point," another implored. A third user went as far as calling her racist as writing in the comment section, "This is racist propaganda..."

Another wrote a lengthy comment, urging people not to wrongly put the blame on Chinese people, "this video ain't it.... there's absolutely no context or evidence for what's happening here. i wish y'all would stop spreading content that makes things even worse for immigrants and minorities in this country. these people are the main ones who are suffering and while it's good to remain cautious, it's not the fault of this group of people. in fact they're getting the worst of it. stay compassionate."

Someone was confused as to why Summer called Chinese people "trifling" and "nasty" after she was previously mad for being similarly called out because she doesn't like showering. "But she was mad when people called her trifling and nasty for not showering...is the irony not lost on ho bath girl?" the said user wrote, while another slammed her for being "lame."

Summer has not responded to the backlash, but she has since removed all posts from her Instagram page, including the video in question.

Summer Walker Reacts to Grammys Snub: 'The Math Is Literally Not Mathing'