Fans are convinced that the Houston Rockets player accidentally soiled himself during a match against Boston Celtics after photos show a mystery stain on the athlete's pants.

AceShowbiz - James Harden may have pushed a little too hard during a game between the Houston Rockets and the Boston Celtics. The professional basketball player is believed to be pooping his pants during the match on Saturday night, February 29.

At one point in the first half, the shooting guard, who was battling stomach flu before the game, was seen lying on the ground with a mystery stain on his pants. After screenshot of the moment spread online, fans could not help speculating that he accidentally soiled himself. 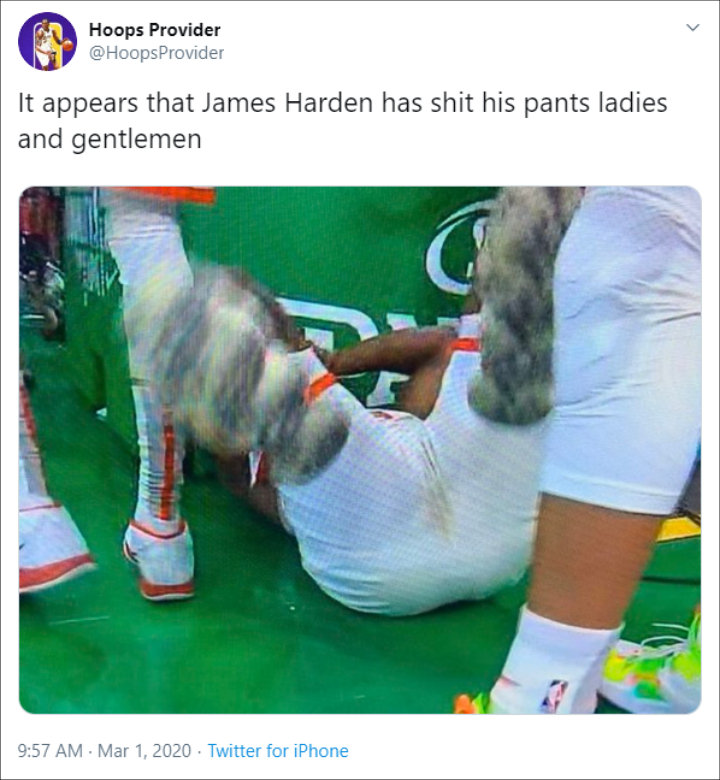 James Harden is roasted on Twitter for allegedly pooping his pants.
See also...

Some others posted memes and poked fun at the allegedly embarrassing incident. "James Harden couldn't wait to poop again," one roasted the 30-year-old athlete. "James Harden s**t his pants to honor Paul Pierce, who is in attendance for tonight's game. Rarely see today's superstars show respect to legends of the past like this. Awesome!" someone sarcastically tweeted.

James has not responded to the speculation, but he would not be the first athlete to have crapped his pants. In 2015, Florida running back Adam Lane showed a suspicious stain on the back of his pants. Since the game was being played on an artificial surface, many believed that he pooped his pants instead of catching the mud or dirt. Some of the Florida assistants were later seen helping Adam cover up his backside as he left the field.