Having been found guilty of third-degree rape and criminal sexual acts in the first degree by New York City jurors, the disgraced producer awaits for sentencing on March 11 in custody.

AceShowbiz - Actresses Rose McGowan and Mira Sorvino are applauding those who helped to put Harvey Weinstein behind bars following his sex assault conviction.

On Monday (February 24), New York City jurors found the disgraced producer guilty of third-degree rape and criminal sexual acts in the first degree, the latter of which carries a punishment of up to 25 years in prison.

Weinstein was ordered to be remanded in custody until sentencing on 11 March, and was led away from the courtroom in handcuffs after the verdict was announced.

After the news hit headlines, McGowan and Sorvino, who had both been part of the 2017 exposes in which Weinstein was first accused of being a serial sexual predator, which sparked the #MeToo movement, addressed the convictions in a phone press conference, alongside a group of other alleged victims, known as the Silence Breakers.

"Today because of the brave women who bared their deepest hurt for the world to see, he is in Riker's Island (prison)," McGowan said. "For once, he won't be sitting comfortably. For once, he will know what it is like to have power wrapped around his neck."

Sorvino added, "Harvey Weinstein has harmed many of our lives, even in our nightmares, long after he initially did what he did to each one of us. We have finally taken that power back. And we have exposed his evil and others like him, the true ugliness. He will rot in jail as he deserves and we will begin to have some closure."

In addition, actress Daryl Hannah, who accused Weinstein of sexual harassment, expressed her gratitude to those who had taken a stand against the producer, who also faces a sex crimes trial in Los Angeles.

"For decades Harvey Weinstein used his power and position to harass, assault and rape women," she tweeted. "Now a verdict, from a jury of seven men and five women have held him partially accountable (sic). Harvey Weinstein is a convicted sex offender." 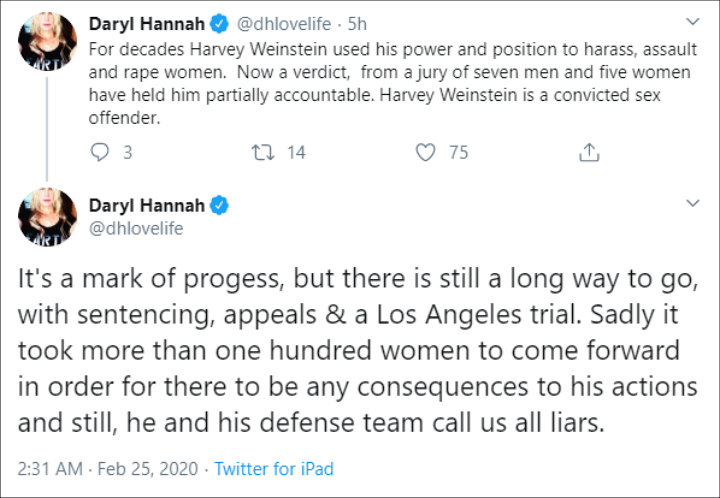 Meanwhile, former "Beverly Hills, 90210" star Gabrielle Carteris, who serves as president of labour union SAG-AFTRA (Screen Actors Guild - American Federation of Television and Radio Artists), also issued a statement, declaring, "Justice was served today and Harvey Weinstein was held accountable for his crimes. But it is only a beginning. We look forward to the Weinstein prosecution in Los Angeles where he will be brought to answer for other offenses."

"We hail the courage and conviction of the powerful survivors who brought this case to trial and saw it through to the verdict. This verdict sends a thunderous message to other harassers and abusers: You can't run and you can't hide any longer. Increasingly, if you harass or abuse, you will be reported, you will get caught and you will be prosecuted."

Although Weinstein was convicted of two charges, he was acquitted on two other counts of predatory sexual assault, and one of first-degree rape as jurors were unable to reach a unanimous verdict on those accusations.