The TLC reality television star proudly shows off her new boyfriend Jerry Sykes on social media and doesn't care even if he's married and his wife is terminally ill.

AceShowbiz - Tammy Slaton introduced her boyfriend named Jerry Sykes on Twitter, posting a couple of selfies with the man. The "1000-Lb Sisters" star proudly called him her "bae for life" and added colorful heart emojis on her note.

The TLC reality TV star quickly came under fire when it's revealed that he's a married man. She defended her relationship, saying she'd already knew about his marriage and didn't need anyone to point it out to her. 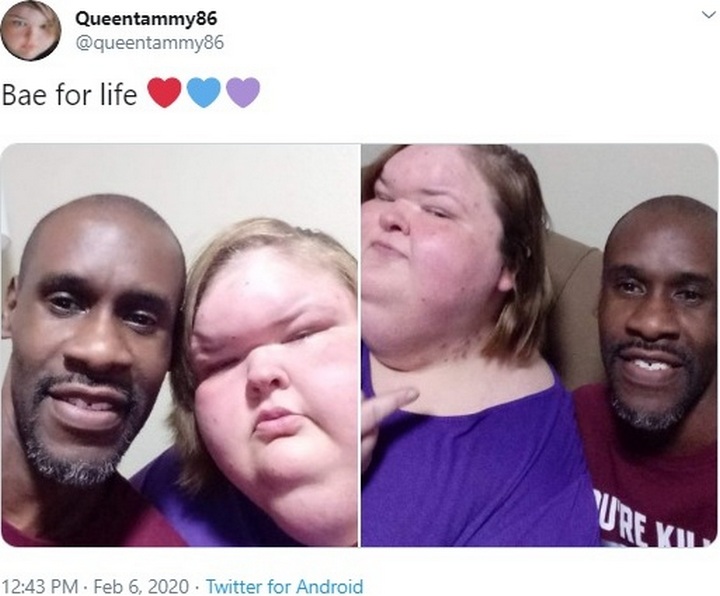 Tammy apparently didn't mind he's married because his wife's "very sick." She responded to one of her followers, "Are you aware that I do know he is married and his wife is very sick so you ain't telling me nothing I don't know."

When another congratulated her for finding her first love, she revealed that she's bisexual and he's not really her first lover. "Today is not my first love I've been with women and man before I was with Jerry," so she wrote.

Although dating a married man whose wife's terminally ill looked bad for her, she didn't seem to care as she added, "I think Jerry's the one you know I mean and yeah being friends is really cool I don't mind."

One fan commented, "I don't understand all the 'congrats.' Dude is a married man. Until he takes care of his business and dissolves that, Tammy is just a side chick." Another said, "Even worse his wife is sick." One other wrote, "So the vows and promises he made mean nothing.... In sickness and in health. Tammy girl you can do better."

Another similar comments, "I'm glad you're cool with being a home wrecker. Don't get mad when people say you're trash...your actions speak for themselves."

Tammy hit back at her critics. She raged, "How about y'all still outta my business y'all rube as hell instead of telling me I have no life or whatever apparently needed to y'all cuz ya trying to ruin mine (sic)."

Ariana Grande: Album 'Thank U, Next' Gave Her the Courage to Be Vulnerable and Honest