Most Controversial Oscars Dresses of All Time

Whether they did it intentionally or not, these stars' choice of outfit have made jaw drop at past ceremonies of the Academy Awards for the wrong reasons.

AceShowbiz - Besides the winner reveals, celebrities' red carpet appearance is one of the most looked-forward things to at every awards event. For this reason, the guests are dressed to the nine for such events, knowing that all eyes will be on them and their fashion that day in particular.

That was also the case for those who attended the Academy Awards over the years. But despite one's effort to impress, no one can't escape the fashion police or critics. Such things have happened to certain celebrities, whose dresses were considered inappropriate for the public event.

As this year's Oscars is just around the corner, let's take a look back at the most controversial gowns at the past Academy Awards. 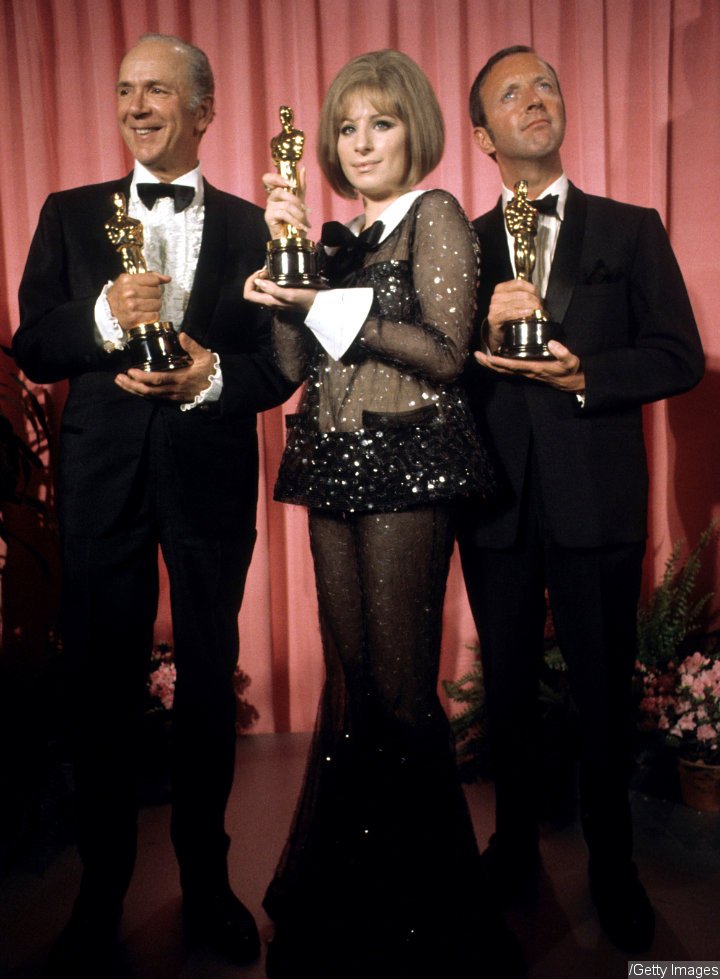 Barbra Streisand definitely gained a lot attention during her first time at the Academy Awards. The then-26-year-old actress, who was up for Best Actress for her role in "Funny Girl", opted for a pantsuit by Arnold Scaasi with flared legs and tuxedo cuffs. Her bold choice later earned her criticism as it revealed more than she bargained for.

Years later, the two-time Academy Award winner explained that she wasn't aware the outfit was see-through. "I had no idea that when the lights hit that outfit, it would become transparent!" she said in a 2016 interview. "I wanted a white collar and cuffs, which it had, and I wore my hair under my chin, because I thought to myself, I'm going to win two Oscars in my lifetime, and I'll be more conservative next time." 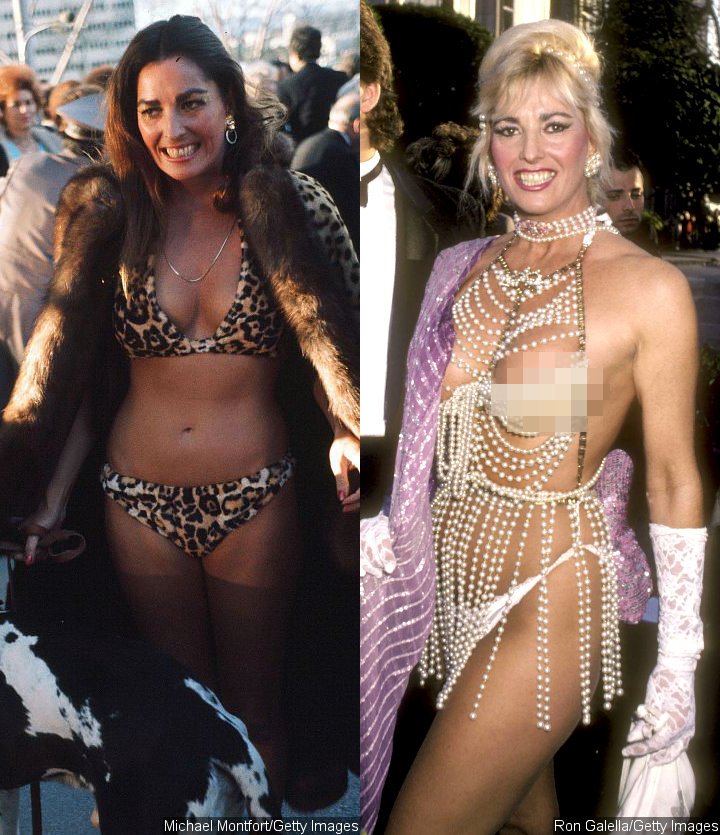 Before Lady GaGa and Katy Perry, there was Edy Williams who is known for her wacky outfits. While it wasn't a surprise that she would wear eccentric clothes to any awards events, two of her outfits for two separate Academy Awards were particularly memorable because they were deemed inappropriate for the event.

One was in 1974, when she came to the event in a leopard-print bikini with a fur coat as she brought her pet dog Great Dane. Summer was still months away back then and she was clearly not in the beach which didn't justify her garb at all. Not showing any remorse, she did it again in 1986, as she graced the red carpet in a very revealing dress, or lack thereof. Her outfit that year featured carefully arranged strands of pearls, leaving very little to the imagination. 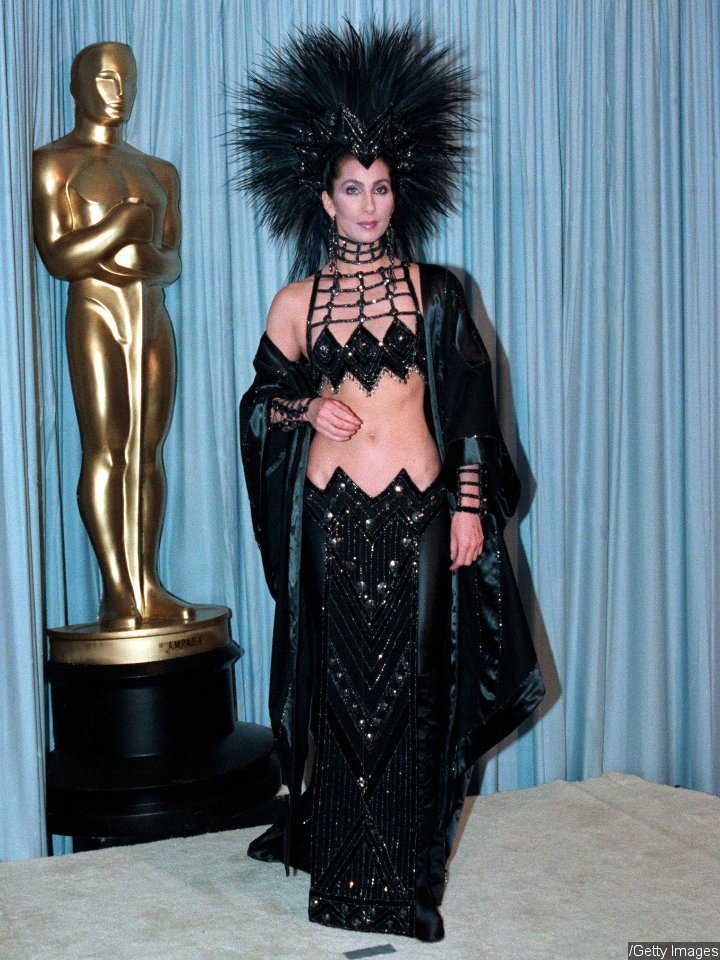 Cher in a Bob Mackie number

Another one who loved to go bold with her outfits, Cher went with a midriff-baring black sequined gown designed by her longtime collaborator Bob Mackie, complete with a dramatic feathered headpiece that made her look like a Las Vegas showgirl. She reportedly wore the outfit as a defiant move against the Academy, which failed to nominate her for her turn in "Mask".

Years later, the singer/actress acknowledged that "some people in the Academy didn't think that [she] was a serious actress" because of that dress. Regretting her choice of outfit, she told British Vogue, "I always felt a bit sad that I presented Don Ameche with his best-supporting-actor award in that outfit. It seemed to make him a little nervous." 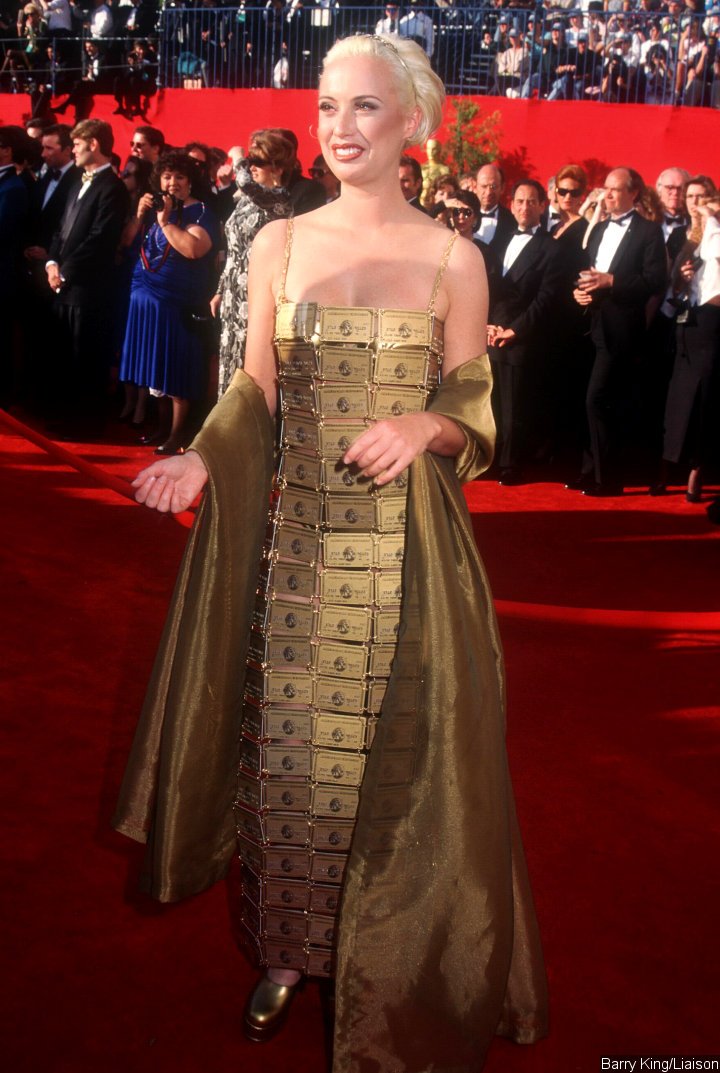 Lizzy Gardiner, an Australian costume designer who won the Oscar in 1995 for best costume design, should've known better what to wear or what not to wear to such event. As she attended the Academy Awards in the same year, she made the bad decision by wearing a dress made out of 254 American Express Gold cards.

"I'm broke, and I didn't have anything to wear. So I went through my list of past good ideas," she said of the dress at the time. But she apparently changed her mind after seeing it from other perspectives following the comments she received. "On the night it really upset a lot of people," Gardiner later reflected. "A lot of women, I think they felt upstaged or pissed off that I wasn’t taking things as seriously as I should." 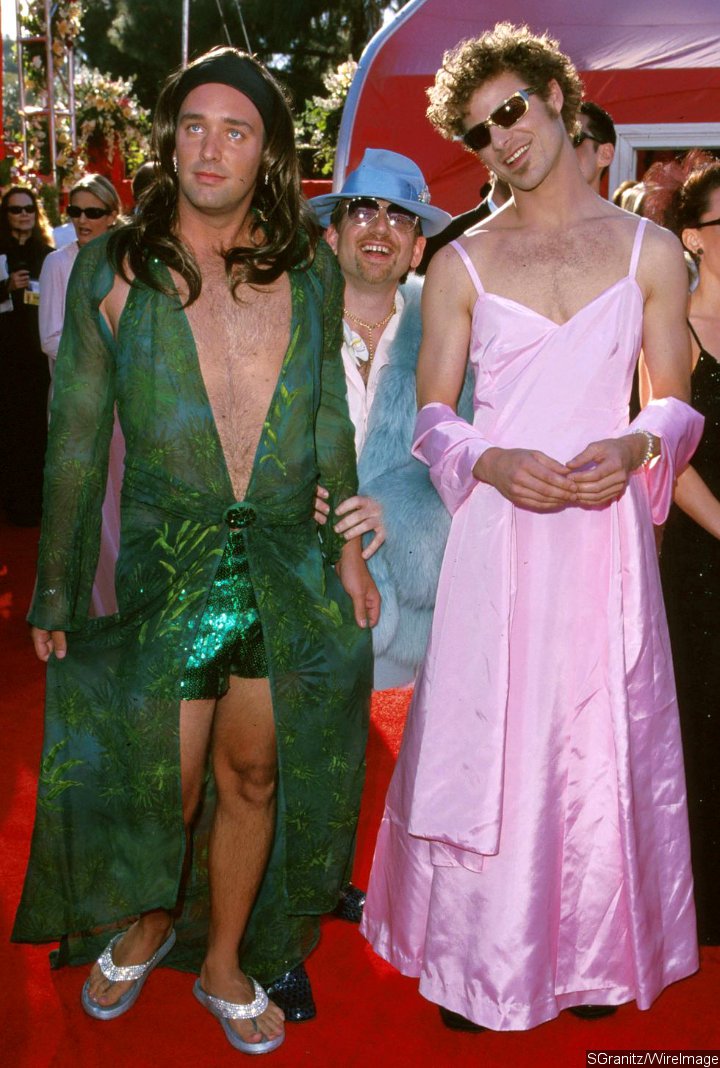 Two decades ago, LGBTQ issues were widely socialized as they are today. Thus, it was an unusual sight when Matt Stone and Trey Parker drag-dressed to the 2000 Academy Awards. The "South Park" creators spoofed Jennifer Lopez's iconic Grammys look and Gwyneth Paltrow's princess gown while making the Oscars debut.

As it was not shocking enough, the two comedic geniuses later admitted that they were high when they wore those dresses at the red-carpet event. There was a speculation that the two had taken cocaine that night, but they set things straight that they were actually high on acid. 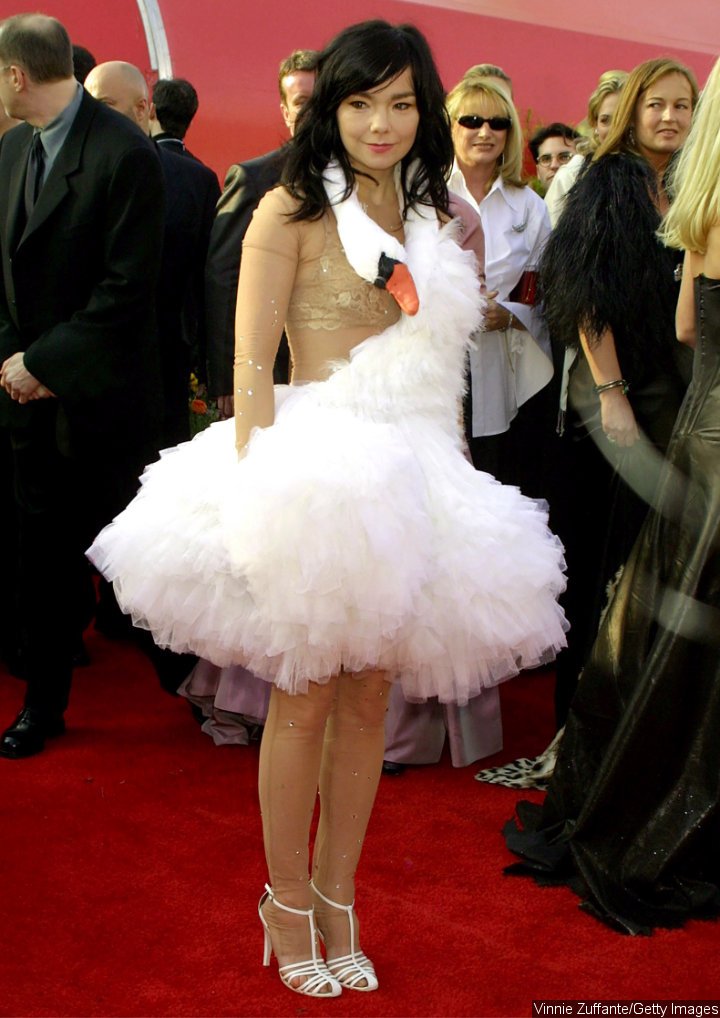 Because of her outfit at the 2001 Academy Awards, Bjork deserved to make the list of the most wacky moments at the Oscars. The Icelandic singer/actress wore a swan dress by Marjan Pejoski. The dress featured full tulle skirt and long swan neck, wrapped around Bjork's own like a scarf. She even brought six ostrich eggs with her and scattered them on the red carpet.

"Other people's bodyguards kept picking them up and saying in their thick American accents, ''Scuse me, ma'am, you dropped this,' " she told GQ in an interview. The dress has since been preserved in museums around the globe and many have spoofed her controversial dress. 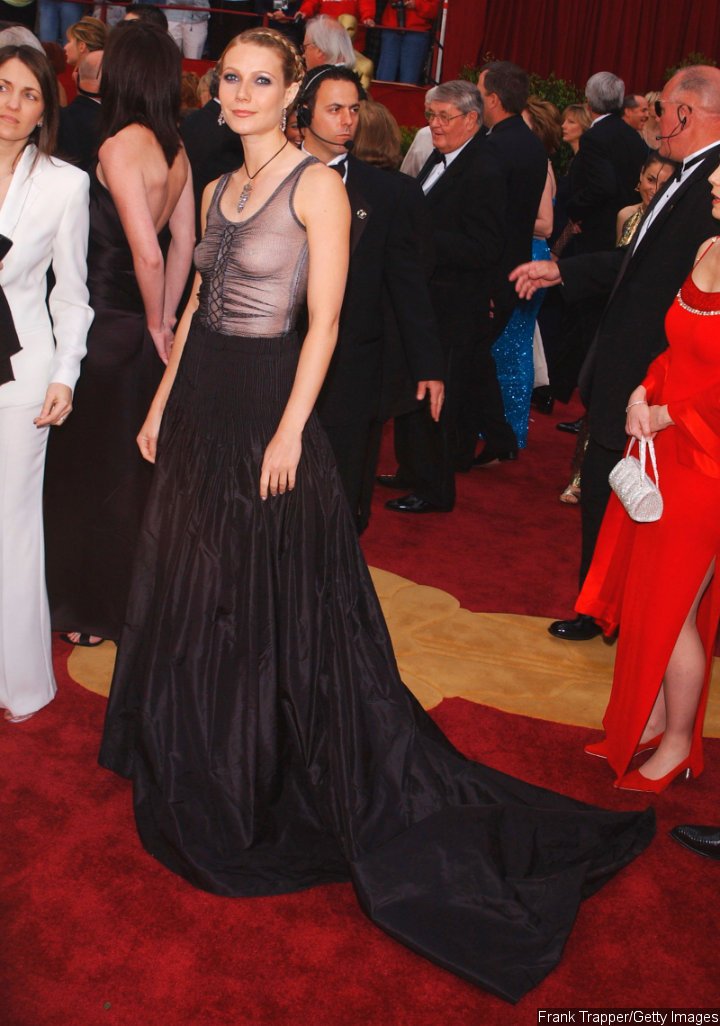 Gwyneth Paltrow risked too much when she chose to depart from her elegant, and oftentimes sweet, red-carpet looks by going glam goth in 2002. She wore an Alexander McQueen dress with a tight, ruched top and full taffeta skirt, which was panned by critics.

But it was her decision to go braless that made the "Shakespeare in Love" actress regret her look that night. "I still love the dress itself, but I should have worn a bra, and I should have just had simple beachy hair and less makeup," she later said. "Then it would have worked as I wanted it to-a little bit of punk at the Oscars." 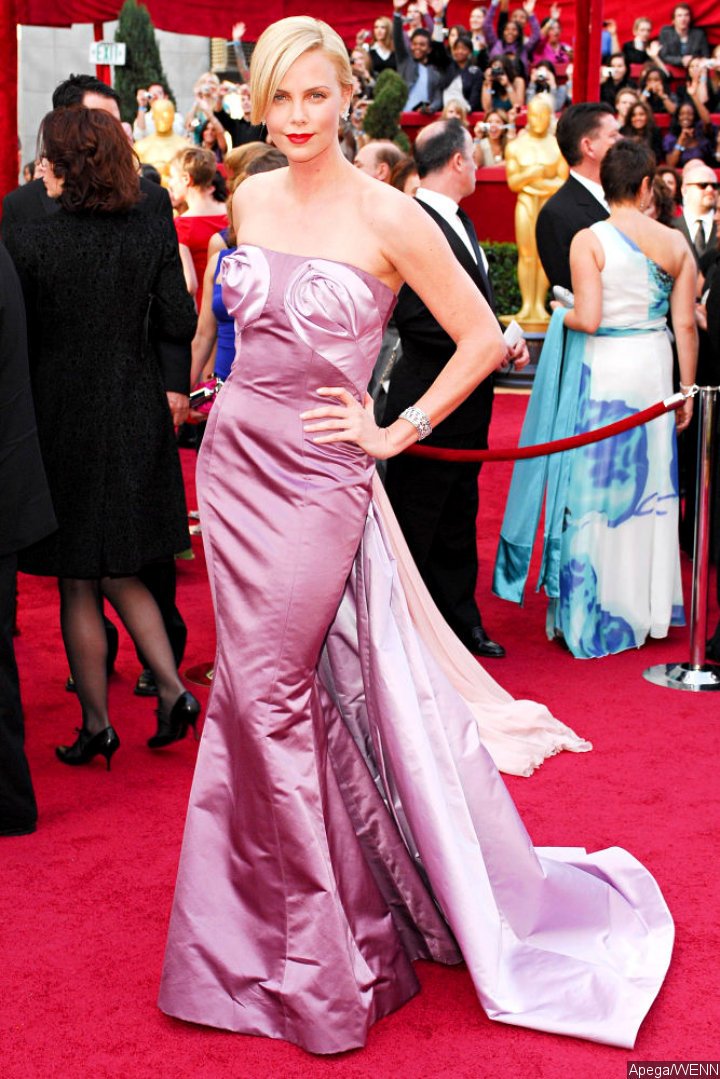 Charlize Theron's dress to the 2010 Oscars would've been all normal had it not been because the wrongly placed details. The actress' lovely pink Dior gown featured two rosettes which were interestingly placed on the bust, drawing negative attention.

E! News described the dress as "something off-the-wall crazy" that's "going down in the history books along with" Bjork's swan dress, while other critics said the outfit made them "gouge" their eyes out because of the rose buds, which they compared to "bulls-eyes." Nevertheless, the "Tully" actress said she "just loved this dress!" 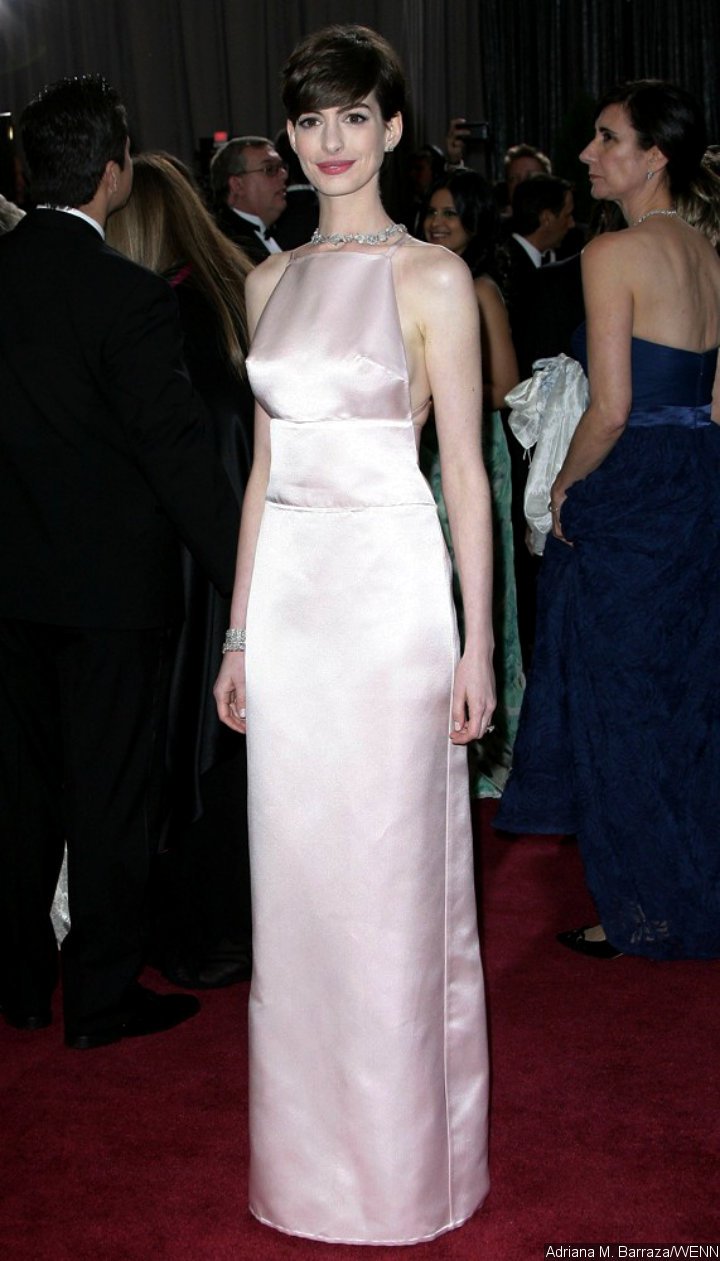 Anne Hathaway made a last-minute change before the 2013 Academy Awards, a decision she would regret until today. The "Les Miserables" actress originally planed to go with a Valentino dress, but eventually went with a Prada gown, because another guest wore a similar outfit with her first choice. The pink Prada number, unfortunately, got a lot of attention for the darts on the chest that looked like her nipples.

"I look in the mirror, turn to (her husband) Adam, and say, 'It looks like my nipples are hard,' " the Oscar-winning actress recalled the first time she realized there's something wrong with the dress. Running out of time, she had no choice but to hit the red carpet in the now infamous dress. She shared, "He says, 'You look beautiful. Your nipples look pointy. The red carpet's about to close. We gotta go.' " 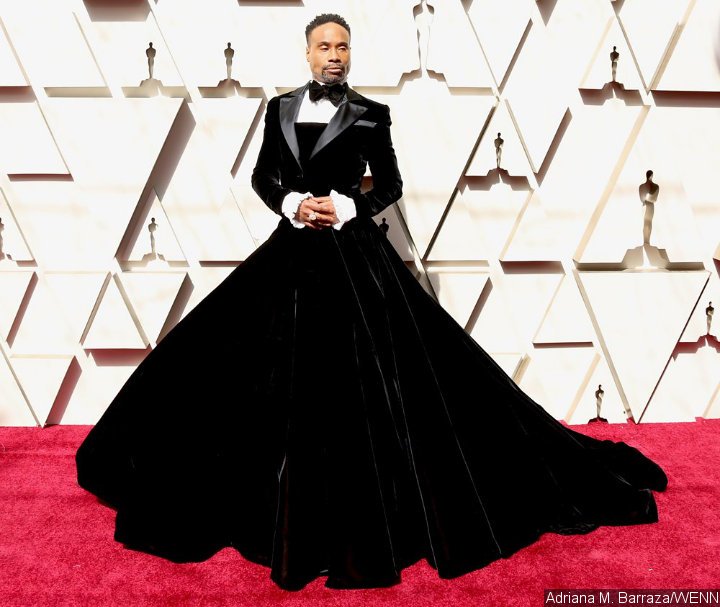 There's no better place to raise awareness about social issues than the Academy Awards. An LGBTQ icon, Billy Porter wasn't afraid to break the boundaries in fashion by coming to the 2019 show in a tuxedo gown by Christian Siriano. True to the name, the outfit was a mix of both, with a collared top and a full skirt.

"I want people to understand that you don't have to understand or even agree with other people's authenticity or truths, but we must all respect each other," he told Vogue of the message he wanted to send with his outfit. While many praised him for his bravery, not a few criticized him for his unusual outfit. "Almost as disturbing as the half man half motorcycle," one Internet user called out the actor for his look that night.