The 'Avengers: Endgame' actor's post sees a black-and-white snap of Kathryn Boyd in a lingerie with an adoring quote from essayist Anais Nin in the caption.

AceShowbiz - Josh Brolin has defended his decision to share an intimate snap of his wife Kathryn Boyd on Instagram.

The 51-year-old "Avengers: Endgame" actor shared a black-and-white photo of Kathryn laying in bed wearing lingerie and holding a rose to her lips, along with a quote from essayist Anais Nin in the caption, reading: "I want to love you wildly. I don't want words, but inarticulate cries, meaningless, from the bottom of my most primitive being, that flow from my belly like honey. A piercing joy, that leaves me empty, conquered, silenced."

However, when one critic penned, "Why show your wife's body off on the internet it's not good, God wants her to cover her body and not expose her body," the Thanos actor clapped back with a response of his own.

"I just spoke to God and God asked me to please ask you to shut the f**k up and go take a shower," Josh fired. 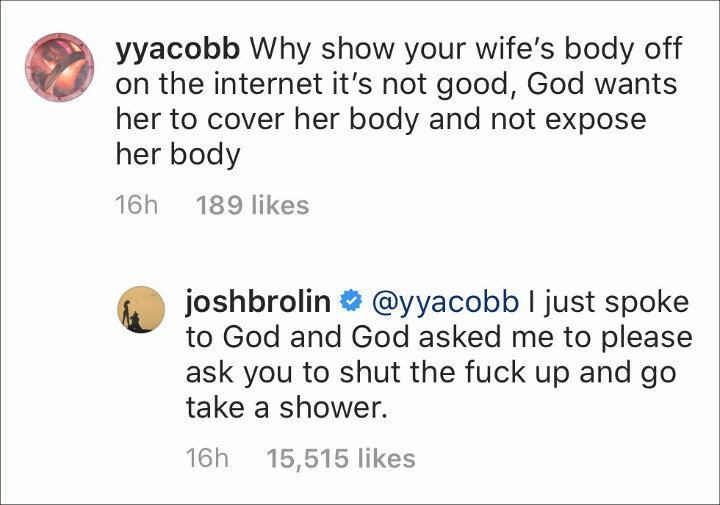 Other users were quick to defend the star, praising him for being so public in his adoration for his wife, noting that from the picture you can "barely see anything anyways."

Diana Rigg Not Afraid of Death During Cancer Battle