In response to the social media star who says that she starts feeling 'depressed' when she's alone, the 31-year-old rapper assures her, 'That's wat I'm here for.'

AceShowbiz - MoneyBagg Yo has set the record straight on his alleged physical altercation with Ari Fletcher. Taking to Twitter on Tuesday, February 4, the rapper insisted that they weren't fighting during the Super Bowl weekend and showed support to the social media star.

He first slammed the report while answering one of Ari's tweets that read, "I hate being alone. I start overthinking and start to feel depressed or something." In response, he promised to keep being by her side as saying, "That's wat I'm here for. F**k da media."

This post got people scratching their heads given how many witnesses claimed that they saw the couple fighting on the streets. "DIDNT YOU JUST SNATCH HER WIG OFF LIKE YESTERDAY !!!" one called him out, as some others called their relationship toxic. Noticing the responses he got on his tweet, MoneyBagg later returned to the site to write, "Can y'all stop with da fake news now this s**t went on long enough."

One of his followers then responded, "If there wasn't video of you pulling ari wig off this wouldn't be going on... I'm just saying." But MoneyBagg didn't get what the user was saying because he later told him/her, "Show me a video where I did some dumb s**t like that. I'll wait." 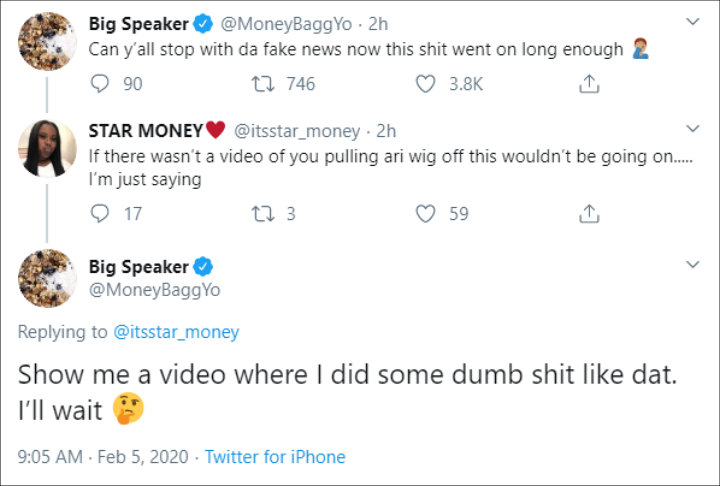 Previous reports stated that the incident occurred when MoneyBagg was hosting at Exchange in Miami. He allegedly "walked out first and then Ari ran after him without her shoes on and punched him from the back." Some other witnesses additionally claimed that the Internet personality hit her rapper boyfriend in the face, and people were convinced that his face was bruised when he held an Instagram Live session later on.

During the Live session, MoneyBagg also made it clear that he and Ari, whom he started dating in late last year, are still together.