Floyd Mayweather Is Trolled for His Louis Vuitton Outfit, 50 Cent Jumps In

The 'Power' star/co-creator couldn't help laughing at his nemesis' duffel bag-inspired jacket, which the retired boxer proudly wore to the Super Bowl LIV.

AceShowbiz - Floyd Mayweather, Jr.'s fashion has once again become the target of 50 Cent's mockery, only this time many have agreed with the rapper. On Sunday, February 2, the retired boxer sported a Louis Vuitton jacket, which featured a bunch of pockets and straps, to the Super Bowl LIV at Hard Rock Stadium in Miami Gardens, Florida.

He showed off his branded outfit on his Instagram page, posting photos of the jacket from the front and back side as he stood inside the stadium. He let the pictures speak for himself, only captioning it with the hashtags "#superbowl #superbowl2020."

While Floyd was clearly proud of his Louis Vuitton jacket, many were left baffled by the outfit that has drawn comparison to a duffel bag. "Why Floyd Mayweather looking like a whole duffel bag?!" one person tweeted. 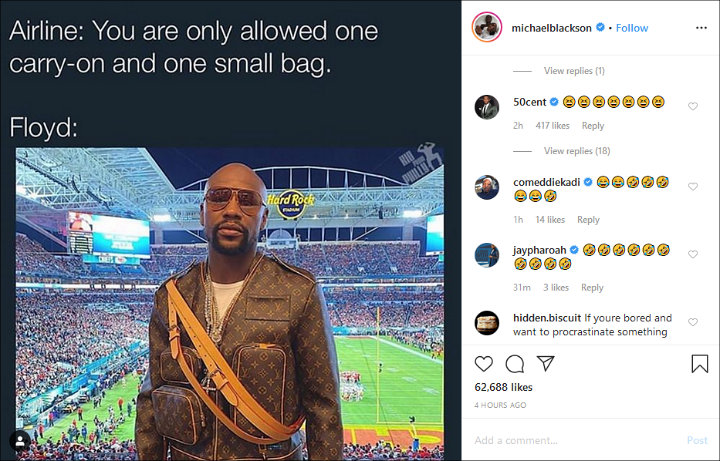 Actor/musician Michael Blackson, whose real name is Jafari Ferguson, posted on Instagram a meme of Floyd in his Louis Vuitton jacket, and many have responded with laughing emojis. Among those who found the 42-year-old's style hilarious was his nemesis 50 Cent. Jumping in the comment section of the post, he also left several laughing emojis.

"Floyd Mayweather look just like one of them grand theft auto players on this pic lol," someone else reacted to his look, while another baffled user wrote, "Go to floyd IG and ask him wtf is he wearing." Another shared her/his opinion, "Looks like you got jumped by Louis Vuitton."

This isn't the first time 50 Cent trolled Floyd over his choice of outfit. Back in October 2019, the "Power" star compared his nemesis' look in a Louis Vuitton coat to an elderly woman's style. "dats that granny drip LOL," Fif wrote along with an image of an elderly woman's face photoshopped on Floyd's body.