Taking to her Twitter account following the basketball star's passing, the 'Westworld' actress reminds her followers that he was both a 'sports hero' and a 'rapist.'

AceShowbiz - Tributes continue to pour in following the death of Kobe Bryant. Evan Rachel Wood was among stars paying her condolences, though her post was met with backlash due to her calling the late basketball star a "rapist." Kyla Pratt even took to her Twitter account to blast the actress.

Following news of Kobe's passing, the "Westworld" star wrote on the micro-blogging site, "What has happened is tragic. I am heartbroken for Kobe's family. He was a sports hero. He was also a rapist. And all of these truths can exist simultaneously."

The backlash was almost immediate, with Kyla replying to her post, "Evan. We met as kids & I grew up in the same industry has (sic) you and have admired your work from afar these past few years. On camera and off. But this tweet? How f***ing dare you?" Director Kevin Arbouet chimed in, "This is an absolutely disgusting comment that reeks of white feminism, narcissism and veiled racism. You too this tragedy and made it about yourself." 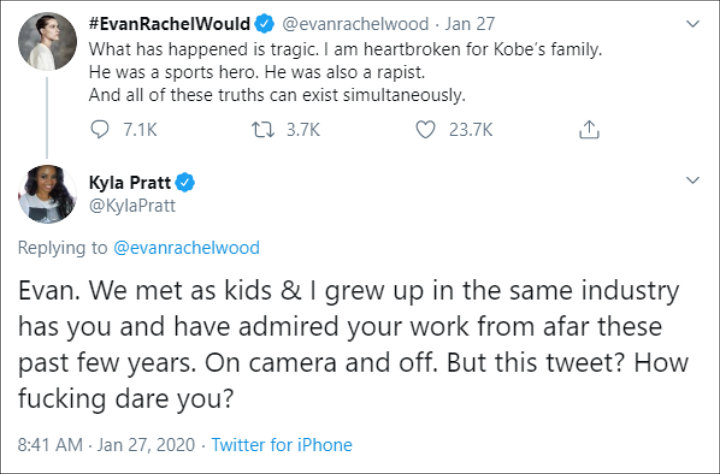 Evan herself did not regret what she said in the slightest bit as she responded to the outrage, "Beloveds, this was not a condemnation or a celebration. It was reminder that everyone will have different feelings and there is room for us all to grieve together instead of fighting. Everyone has lost. Everyone will be triggered, so please show kindness and respect to all."

Sexual assault case against Kobe began in July 2003, when he was arrested after being accused of raping a 19-year-old hotel employee in his hotel room. Kobe admitted to a sexual encounter with his accuser but denied the assault allegation at the time. The case was then dropped after his accuser refused to testify in the case. However, she later filed a separate civil suit against Kobe that was settled out of court. The late star publicly apologized to his accuser, though admitting no guilt.