In the post, Virginia Roberts also includes a photo of her attending the British model's 31st birthday party in St. Topez back in 2001, when she was still 17 years old.

AceShowbiz - Prince Andrew's sex abuse accuser, Virginia Roberts, has surfaced on social media to make several accusations against Jeffrey Epstein's circle of friends, including Naomi Campbell. In the Thursday, January 16 tweet, the now 36-year-old woman alleged that his friends knew what happened to her, but did not intervene to help.

Along with the post was a couple of photos of Virginia attending the British model's 31st birthday party in St. Tropez back in 2001. She was 17 years old at the time, simply rocking a pink crop top paired with jeans and wore her blonde hair down. There was also a photo of her posing with Prince Andrew at British socialite Ghislaine Maxwell's flat. The photo was taken in the same year. 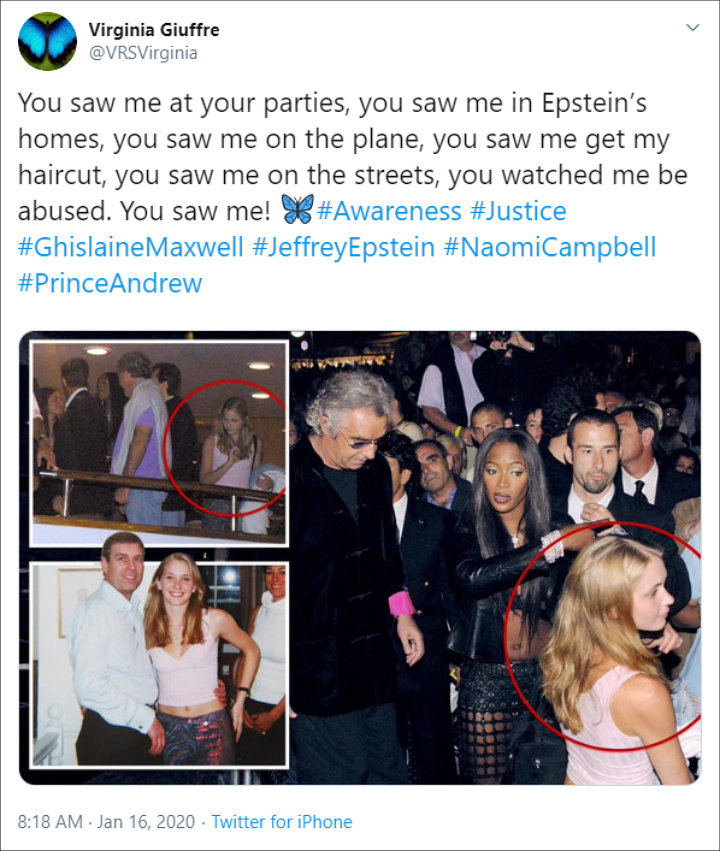 Naomi has yet to respond to the accusation.

Last year, Virginia claimed that she was forced to have sex with Prince Andrew three times at his late friend Jeffrey's home when she was still underage. In an interview, she said that she was brought to London by Jeffrey in 2001, when she was introduced to Andrew and went to a nightclub together. Recalling her time with Andre at the club, she said, "I was just so grossed out from it, but I knew I had to keep him happy because that's what Jeffrey and Ghislaine would have expected from me."

She continued, "In the car, Ghislaine tells me that I have to do for Andrew what I do for Jeffrey and that just made me sick." Victoria also slammed Andrew's claim that a photograph of them together was doctored as saying, "I'm calling BS on this. He knows what happened. I know what happened. And there's only one of us telling the truth, and I know that's me."

R.E.M. Seeks Legal Avenues to Stop Donald Trump From Using Their Songs at His Rallies