The president mocks the New Jersey senator while Booker's girlfriend Rosario Dawson remains supportive after he announces his decision to drop out of the Democrat Presidential Primary Race.

AceShowbiz - Cory Booker has announced that he suspended his presidential campaign and Donald Trump just couldn't let it slide. The president has responded with a sarcastic tweet after the New Jersey senator broke the news on Monday, January 13.

"Really Big Breaking News (Kidding): Booker, who was in zero polling territory, just dropped out of the Democrat Presidential Primary Race," so POTUS tweeted. He mockingly added, "Now I can rest easy tonight. I was sooo concerned that I would someday have to go head to head with him!"

Trump's apparent dig at Booker's withdrawal from the Democratic primary has since backfired, with many people calling him out for his petty comments. "The pettiness of it all," one commented on the president's tweet. Another similarly responded, "He's petty af."

Another dubbed the 73-year-old "so embarrassing," while one other said, "He's sick." Someone else said, "No 69 Trump the next best troll on the internet, I hate this neeega." Another user wrote, "What an embarrassment. Tweets like a teenager."

"This startn to get childish," one branded Trump's reaction to Booker's announcement. Another suggested, "man somebody take his phone from him," while some others found good laugh with the president's sarcastic tweet.

Booker took to his own social media account to announce his decision to drop out of the Democrat Presidential Primary Race. "It's with a full heart that I share this news-I'm suspending my campaign for president," so he posted on Twitter. "To my team, supporters, and everyone who gave me a shot-thank you. I am so proud of what we built, and I feel nothing but faith in what we can accomplish together."

His girlfriend Rosario Dawson later showed her support for him as she tweeted, "Cory, you continue to inspire me everyday. On this journey you and your remarkable team have represented the best in us and I know you will continue to. Thank you. I see you. I love you." He sweetly replied to her, "I love you honey, so much." 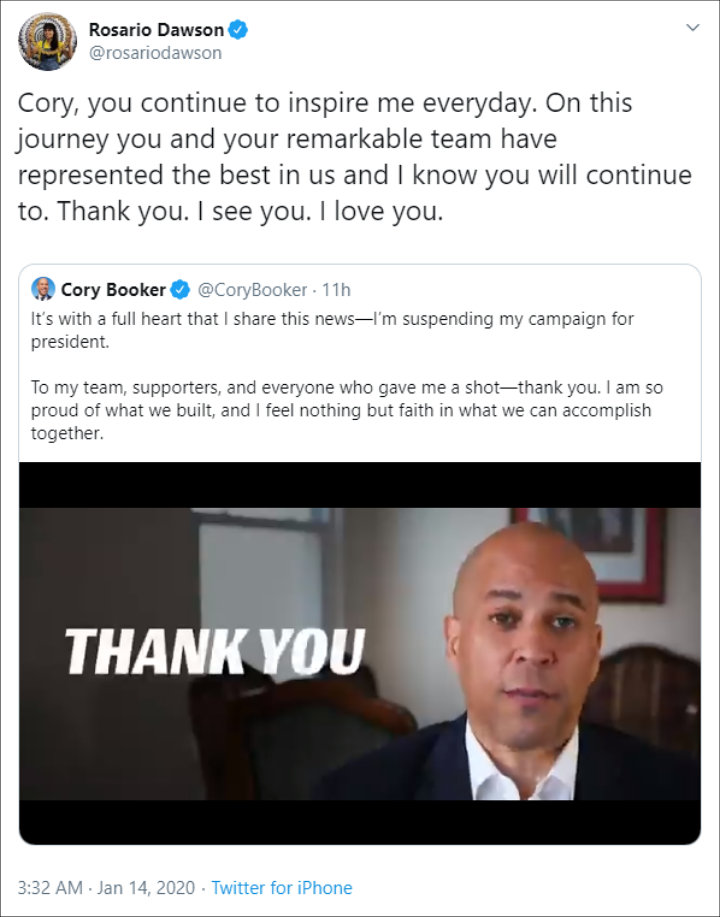 Meanwhile, fans have expressed their disappointment at not being able to see the actress as the First Lady of the United States. "AND today marks the end of the campaign of First Lady Rosario Dawson 2020, my sweet, what's up?" one tweeted. Another added, "As a nation, we've lost the potential for a Rosario Dawson first lady. Devastating."

"As a mixed wlw, I will be forever bitter that we as a nation lost out on the opportunity to have Rosario Dawson as FLOTUS," someone else similarly reacted to the news. "honestly cannot believe this 'First Lady' category snub for Rosario Dawson," read another comment.

Responded to fans' reactions, Booker jokingly revealed that his mom was also disappointed that the actress has lost her shot at being FLOTUS. "Have you been talking to my mom," he tweeted along with a link to the news.

Donald Trump Slammed for Tweeting 'All Is Well' After Iran Attack to U.S. Troops in Iraq