In response to the 'Jumanji: The Next Level' star's light-hearted complaint, journalist Devan Coggan hits back with a jab that she has seen the sequel to support 'close personal friend Danny DeVito.'

AceShowbiz - Dwayne 'The Rock' Johnson jokingly called out a friend online who tweeted about going to the movies to watch "Cats" for a second time.

The actor's journalist friend Devan Coggan was clearly a fan of Tom Hooper's big screen adaptation of the Andrew Lloyd Webber stage classic, but failed to mention The Rock's "Jumanji: The Next Level" on his page.

Devan responded to Dwayne's tweet, however, soon confirming that she actually saw the film too.

She wrote: "Hey, I already saw Jumanji weeks ago!!! I had to support my close personal friend... Danny DeVito." 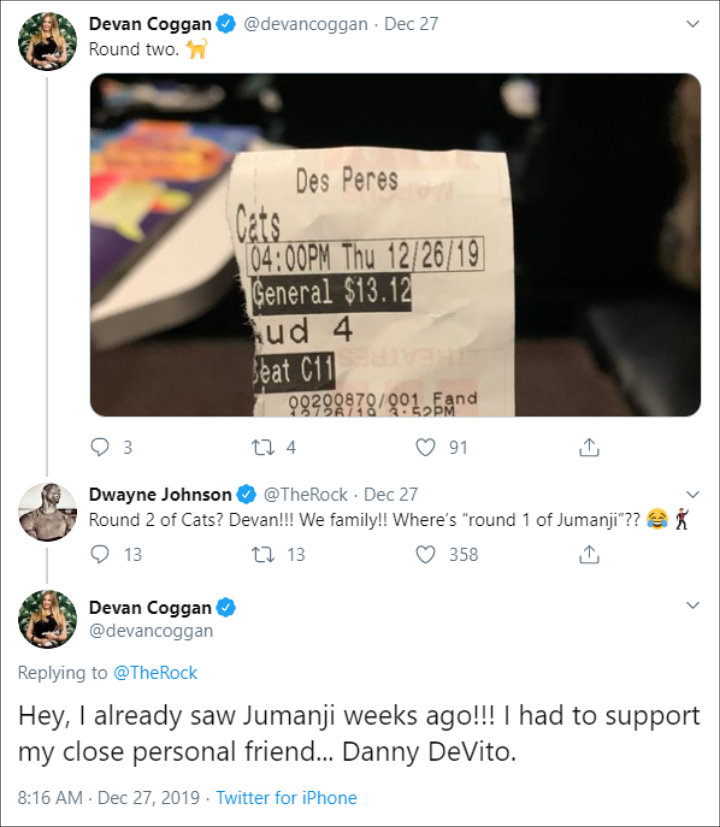 "Jumanji", also starring Kevin Hart and Karen Gillan, was a critical and commercial success when it was released earlier this month (December 2019), whereas "Cats" - which features Taylor Swift, Judi Dench and Jennifer Hudson - has been panned by audiences and reviewers alike.