The 'Work' singer allegedly jets off to Sweden where the rapper is scheduled to perform after they were posing together on the red carpet of British Fashion Awards.

AceShowbiz - The internet went abuzz with reports saying Rihanna might be dating hip-hop star A$AP Rocky. The romance rumors came after they posed together on the red carpet of British Fashion Awards at London's Royal Albert Hall on December 2.

Her label won Urban Luxe prize at the event. The award was presented to her by Tyler, the Creator and Janet Jackson who told her, "You are loved for your style."

The Barbadian Grammy-winning star fueled the internet chatters as she allegedly jetted off to Sweden where the A$AP Mob member was scheduled to perform. He was set to take the stage at the Ericsson Globe venue on December 11. He made his first return to the country after his arrest in summer this year. 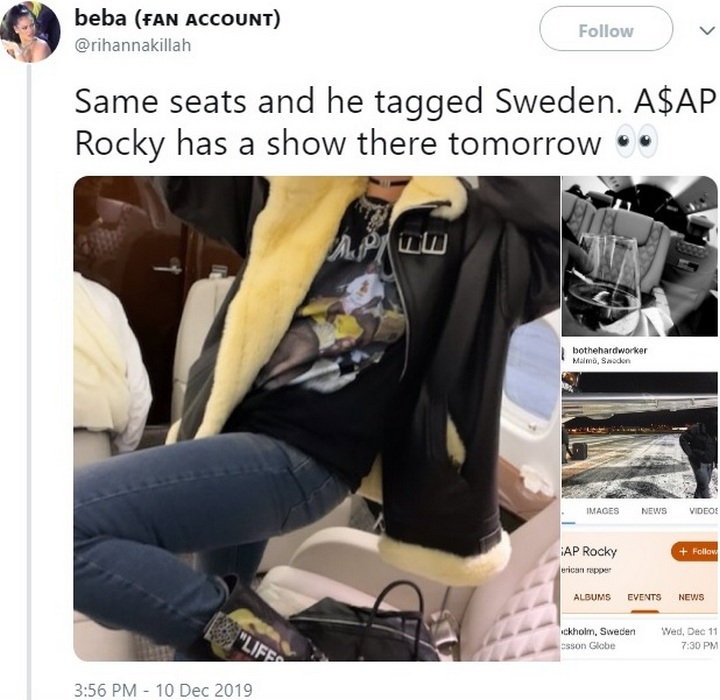 Rihanna reportedly jets off to Sweden

Rocky originally planned to return to Kronoberg prison, where he was previously taken into custody, to perform for his former fellow inmates, but his request was rejected by the officials. It didn't dampen his spirit, however. He announced on Instagram, instead, that he's sending out free admission invites to his show.

His romance rumors with Rihanna led to speculations that she broke up with her Saudi billionaire boyfriend Hassan Jameel. The Fenty Beauty mogul started dating the Saudi businessman in 2017. In an October interview with Vogue's Anna Wintour, she confirmed she was "in an exclusive relationship for quite some time," but didn't name who her boyfriend was.

A month later, she hinted at going through a difficult time. "To all my friends/family/coworkers who I have yet to get back to in the past months...please forgive me," she wrote on Instagram. "This year has been quite an overwhelming one, and I'm working on that ish called Balance."

Meanwhile, A$AP Rocky previously dated Kendall Jenner. In August, he was spotted on a date with Brazilian model Daiane Sodre.