Meanwhile, Wendy Williams surprisingly shows support for Kourtney and her decision not to share her personal life on camera, risking herself to get fired from the long-running reality show.

AceShowbiz - The latest episode of "Keeping Up with the Kardashians" saw Khloe and Kim Kardashian confronting sister Kourtney Kardashian for her lack of screen time on the family show. That apparently confused the viewers because Khloe Kardashian and Kim didn't seem to have a problem with their other sisters Kendall and Kylie Jenner who also didn't appear much on the show.

"this ain't shade AT ALL but do Kendall and Kylie have different contracts now for #KUWTK? cos Kendall rarely films and Kylie isn't featured a whole lot? #KUWTK," the fan wondered on Twitter on Monday, December 9.

Khloe caught wind of the tweet, explaining that Kourt's situation couldn't be compated with Kendall Jenner or Kylie's. "Kendall and Kylie have different contracts," so the Good American Jeans founder replied. "Kourt, Kim and I have an equal contract." 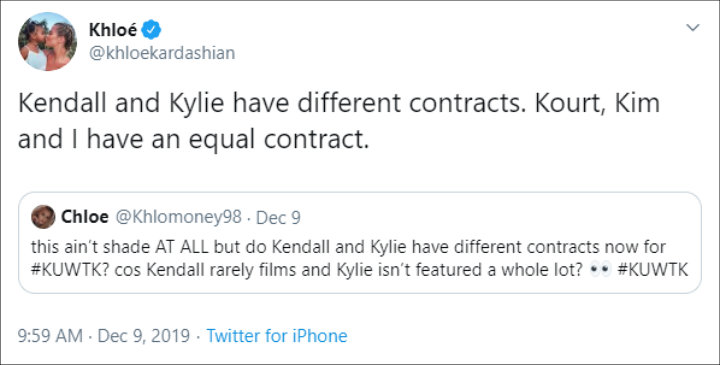 Meanwhile, Wendy Williams surprisingly showed support for Kourtney and her decision not to share her personal life on camera, risking herself to get fired from the long-running reality show. "I'm on Kourtney's side, not for nothing," the 55-year-old host told her studio audience during Hot Topics in the December 9 episode.

"I don't feel they'll kick her off the show, because fighting about her not wanting to share if fun," Wendy continued, adding that it was easier for Kim and Khloe to share more about their lives on the show. "I mean, Kim shares everything because that's how we met her, OK," she said, referring to Kim's 2002 sex tape with ex-boyfriend Ray J that leaked in 2007.

Meanwhile, she explained that "Khloe shares everything because she was the one that no one cared about when the show started."

Of Kourtney's decision, Wendy said, "There's nothing wrong with that. That's a morally sound decision. When you grow up and you're sharing stuff, then all of a sudden you've got a personal life of your own and you're 40, messing around with a 26-year-old, or whoever. I wouldn't share that either, not because it's good, because it's not right."

Kim Kardashian Addresses 'KUWTK' Feud With Kourtney: We Are In a Good Place