The 'Underworld: Blood Wars' actress also shares an empowering message urging women to still love their bodies despite their ages after some online trolls dub her 'too old' to pose in swimsuits.

AceShowbiz - Kate Beckinsale refused to stay quiet when being targeted by bullies. The actress best known for her role as Selene in the "Underworld" film series has recently found herself being trolled online for posting photos of herself in different bikinis, but was quick to offer a snappy comeback.

The online banter between the "Love & Friendship" actress and her trolls began after one Instagram user commented, "I feel like you are having a mid life crisis or something." In response, she wrote back, "Oh! I think that's because you're an annoying a**hole." When the person countered, "at least I have pretty green eyes and my youth," she came back to say, "Yes darling at least you have those XX."

It wasn't until another user branded her "too old" and "looking for attention" that the 46-year-old went to school the hater. "Are you aware that when you get the urge to accuse someone of something, especially someone you don't know, or attribute an intention without ever having met the person," she began, "that the only thing really being achieved is revealing something about yourself or something you fear about yourself?"

"I don't know you and I don't know who has made you feel that if you get older you have no value, can't be attractive or sexy or have a relationship with your body that isn't only self loathing," the ex-wife of director Len Wiseman continued her message about ageing and self-love, "but as one female to another, don't let any of that noise bother you."

"You'll feel more powerful, may well physically blossom, know who you are and what you want and get good at setting healthier boundaries. If you're young and fearing getting older, don't. It's not at all how people scare you it will be especially for a woman. You'll come into your own power in a way that feels steady and so many more things will be possible."

"The people or press that are scaring you that your value is tied up in youth, or in fact anything that is not currently within your reach, is noise I do hope you allow yourself to ignore. If you're older and fearing less is available to you, it actually isn't, don't let that limit you in anything. I can't imagine how unhappy you must feel to leave comments like this. People have all sorts of things going on that they put a brave face on and you'd never know." 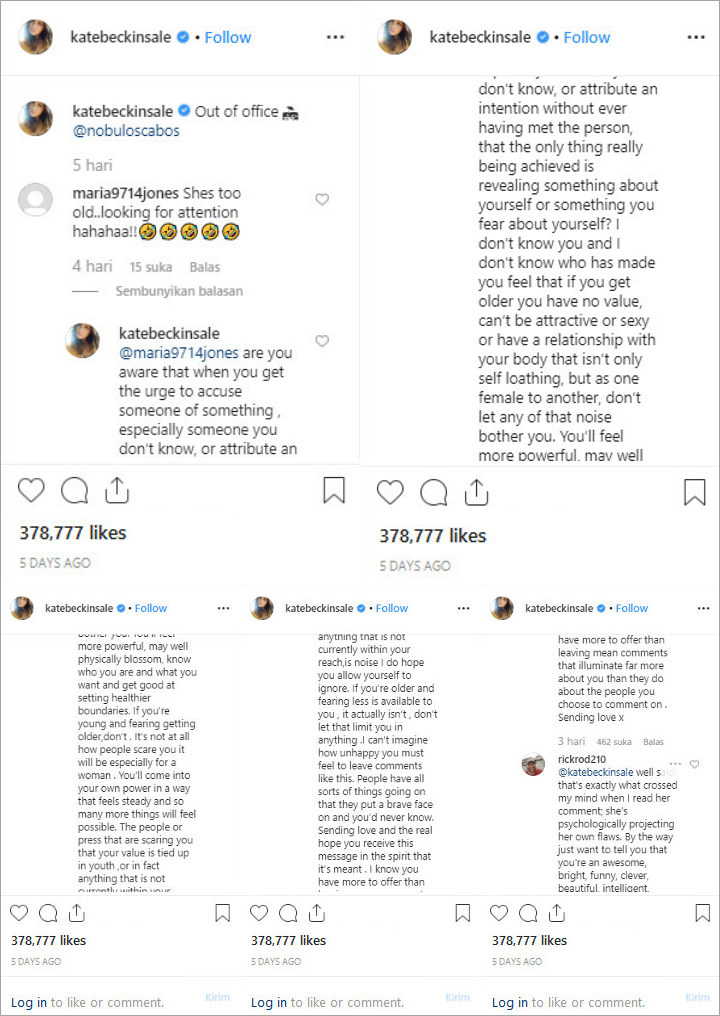 Kate ended her lengthy lecture on a positive note. "Sending love and the real hope you receive this message in the spirit that it's met," she stated. "I know you have more to offer than leaving mean comments that illuminate far more about you than they do about the people you choose to comment on. Sending love x."