In related news, Julianne Hough breaks her silence on the drama during her appearance on People Now with rapper Waka Flocka Flame urging people to boycott 'America's Got Talent' in a new interview.

AceShowbiz - The controversial firing of Gabrielle Union from "America's Got Talent" sparks further investigation into the matter. It arrives eight days after it was reported that Gabrielle and fellow judge Julianne Hough were fired after one season of the show amid complaints of toxic culture on set.

The decision to open an investigation into "America's Got Talent" was made by NBC following a five-hour meeting, which discussed the alleged toxic culture on the show, involving both parties on Tuesday, December 3. Of the meeting, Gabrielle wrote on her Twitter account, "We had a lengthy 5-hour, and what I thought to be, productive meeting yesterday. I was able to, again, express my unfiltered truth. I led with transparency and my desire and hope for real change." 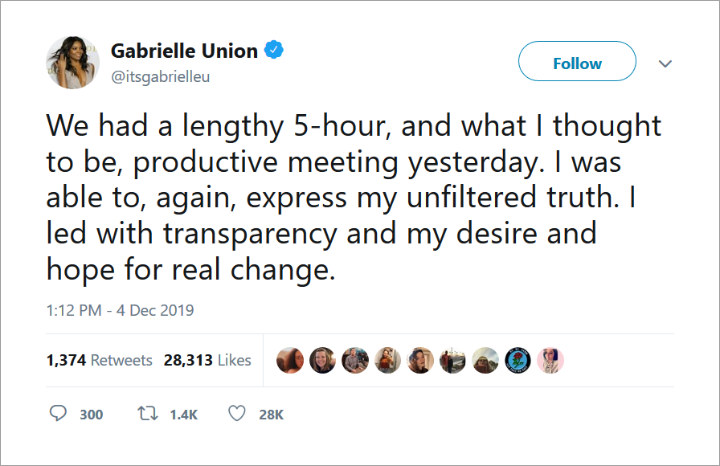 Gabrielle Union revealed she had a meeting with NBC

An NBC spokesperson details the meeting in a statement, "The initial conversation was candid and productive. While there will be a further investigation to get a deeper understanding of the facts, we are working with Gabrielle to come to a positive resolution."

It was said that judge and executive producer Simon Cowell seemed to be the center of the investigation as he allegedly played a big role of what went down in the "Bring It On" star's firing. Previous reports said that guest judge Jay Leno made an inappropriate joke which didn't sit well with Gabrielle, who also took issue about Simon smoking indoor frequently. In addition to the fact that it goes against the law, Simon's smoking habit results to Gabrielle, who is allergic to cigarette smoke, developing an ongoing bronchial infection as a result.

In related news, Julianne broke her silence on the drama during her appearance on People Now on Tuesday. "I would just say that -- my goodness. I just believe and value at the highest regard that everybody has a voice and should be heard, first and foremost," the 31-year-old said.

"And then I believe that the paradigm of the workplace and how you do business and work with people now, it's shifting, and I think that the people that really want to see change happen are going to authentically and positively … do that. And so that's all I really have to say about that."

Waka Flocka Flame, meanwhile, also weighed in on the drama. Speaking to TMZ, the rapper said, "I'm just lookin' for our people to stop f**k with these companies." The Queens native also praised Gabrielle for "just putting it out there."

"They wanna change who you are, it's up to you change," he said "It's not up to you to complain. Don't change. Keep it movin'. Expose it, keep it movin'. You want change, you gotta bite bullets. It should be your job to stand for what you stand for. People tell how they feel about you in action, and that action they took right there, was obvious as f--k."

Billy Dee Williams Retracts Gender-Fluid Confession: What Does That Mean?

Sofia Vergara in Talks to Replace Gabrielle Union on 'AGT'

Gabrielle Union 'Unapologetic' About Her 'AGT' Appearance Despite Branded 'Too Black'