The 'Black Widow' rapper has shared a numbers of artwork from her upcoming new EP although she has to push back its release to finish the mixing of one of its songs.

AceShowbiz - Iggy Azalea has been forced to deny using photo editing software on images from her new EP, "Wicked Lips".

The rapper has delayed her album release due to a missed deadline but debuted its artwork online, after which she was accused of adding an acrylic nail to her pinky finger that had been missing from a previous set of promotional photos from the same shoot.

Commenting on an image from the shoot, one fan wrote: "She had the nail edited!"

However, responding to the accusation, the "Fancy" star explained that the nail had simply broken during the shoot, leaving her with a missing piece of acrylic in certain photos.

While the record was set to drop on Friday, November 15, Iggy had to push back the release to finish working on one of the songs.

"I'm really sorry, but I'm still mixing a song on my EP that has a feature on it and there's no way I can make the deadline," she tweeted on Thursday. "It's really important to me the song is on the project. 'Wicked Lips' will have to be next week." 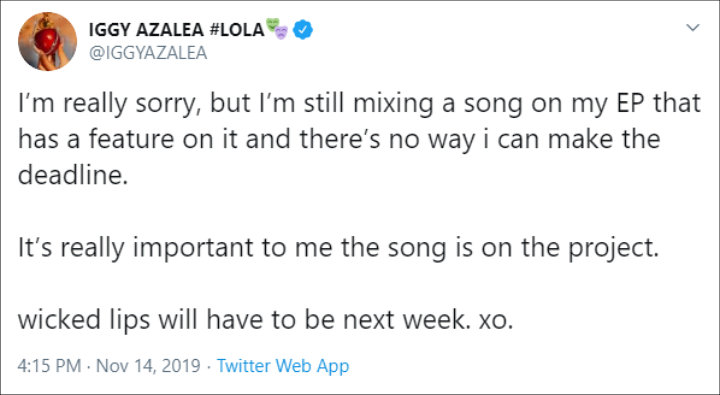 Iggy Azalea apologizes to fans for her album's release delay

Further explaining the hold up, she tweeted: "I only got the vocals back on Monday and I want anyone I collaborate with to shine so I'm not gonna upload a mix just to make a deadline if I feel isn't as good as it can be." 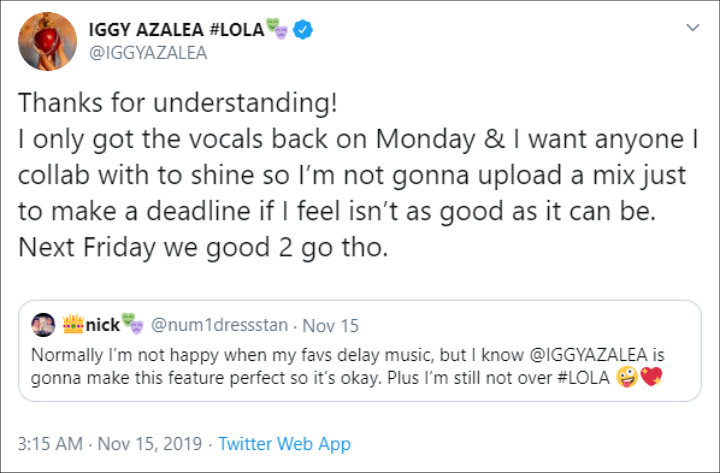 Iggy Azalea explains that she wants her collab partner to 'shine'

"Wicked Lips" includes the single "Lola", which features up-and-coming singer Alice Chater, and is out now.