However, the Bravo personality later deletes the post, which she shares on her Twitter account, after her husband, Chris Samuels, tells her to stop being 'petty.'

AceShowbiz - It looks like coming after her nemesis alone isn't enough for Monique Samuels. Fans are convinced that the Bravo star shaded her "The Real Housewives of Potomac" co-star Candiace Dillard's husband Chris Bassett in a tweet she shared on Monday, November 4.

Monique was heaping praises for her Man Crush Monday, husband Chris Samuels, when she threw the shade. Alongside a photo of the couple together, the TV personality said, "My #MCM of course is my hubby I love that he's a real man and never involves himself in female issues." However, it appeared her husband didn't like the shade at all because she later deleted the post and shared a new one.

In the caption of the new post, Monique wrote, "When hubby says stop being petty, you hit delete. My #MCM every week @chrissamuels60 He keeps me balanced." 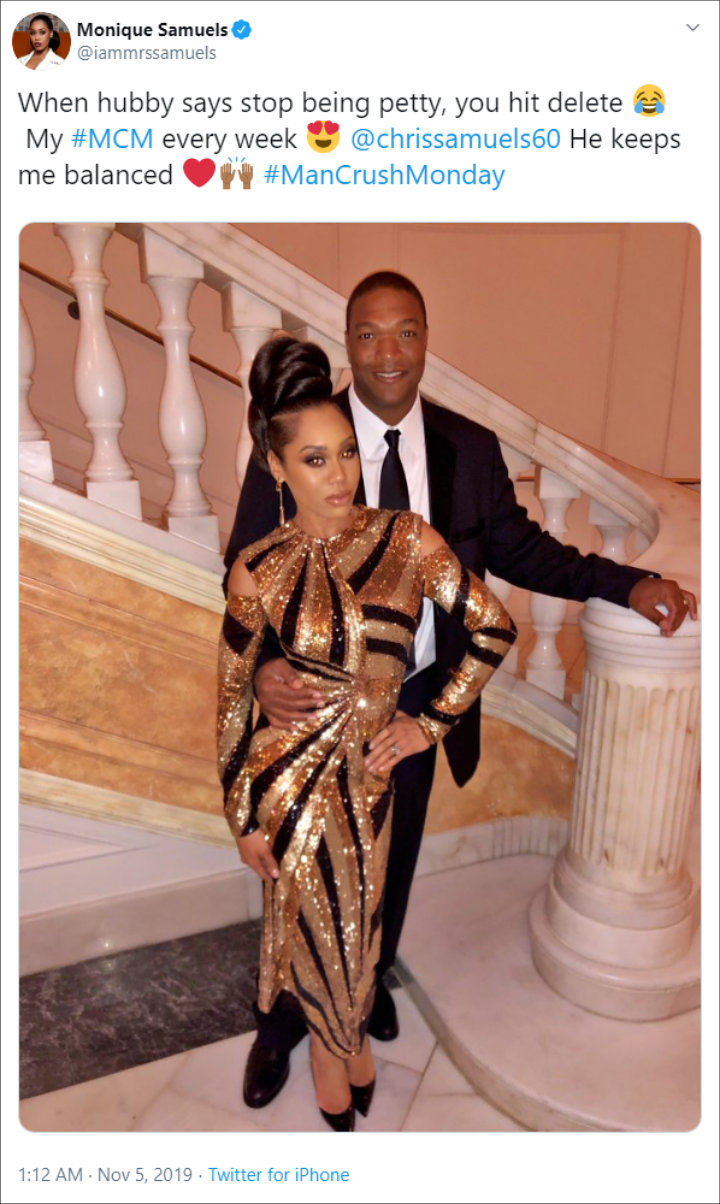 Monique Samuels deleted her post after her husband told her to stop being petty.

Monique didn't name names in her post, but a lot of people had already been convinced that she was referring to Chris Bassett. "I'm assuming this is about Candiace's husband. He is the type to get messy and involve himself in women beef," someone said, as another echoed, "This is definitely about Chris Bassett. Him and Michael are the only two who get so involved in the mess. And well we know Michael and Ashley are good with Monique and her hubby."

"Oh I think it's pretty obvious who this is about. I'm sure Candiace will have something to say soon. LOL," one other commented, as an individual told Monique, "Sometimes you have to be petty especially when people go out of their way to constantly speak on you."

Monique and Candiace had a fall-out after the former started befriending Ashley Darby. The two briefly made amends, before they started throwing shades at each other again on social media. Things apparently further went south when it was reported that the former best friends had a huge brawl while filming for the new season of "RHOP". Police allegedly were involved, and Candiace got herself injured.