Bill Murray Gets Hired at P.F. Chang's in Atlanta Airport

The 'Ghostbusters' star reveals on Amy Schumer's podcast, '3 Girls, One Keith', that he filled out a work application at the airport Chinese eatery because of its staff.

AceShowbiz - Bill Murray has landed himself a new side gig after applying to work at an airport restaurant in Atlanta, Georgia.

The comedy icon reveals he recently passed through Hartsfield-Jackson Atlanta International Airport and decided to submit an application to work at the Terminal A outpost of Chinese eatery P.F. Chang's.

"I did fill out an application at P.F. Chang's at the Atlanta airport because I think that's one of the great places," he told funnywoman Amy Schumer on her podcast, "3 Girls, One Keith".

Explaining why he was attracted to the job, he admitted it was all down to the restaurant staff: "It looks like they are having the best time working at P.F. Chang's," he shared.

Murray, 69, has since been offered the opportunity to join the team at the company, with a representative taking to Twitter on Tuesday, October 29, to invite the Ghostbusters legend on board.

"Bill, you're hired! When can you start?" read the tweet. 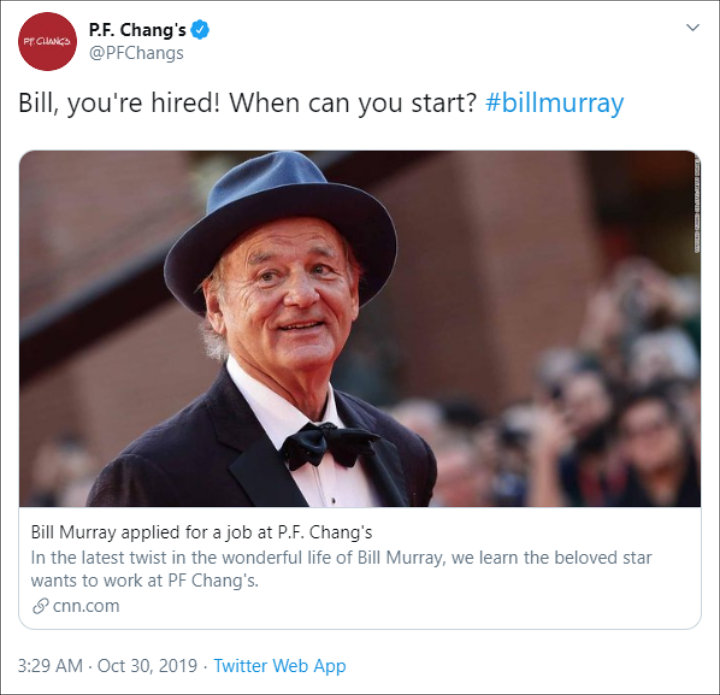 Bill Murray gets hired at P.F. Chang's in Atlanta airport.

Murray has yet to publicly respond to the offer.

Bill Murray Gets Hired at P.F. Chang's in Atlanta Airport

Bill Murray Wants to 'Introduce' Selena Gomez to His Mother: 'I'd Bring Her Home'