The former One Direction member admits to turning down the role of Prince Eric in the upcoming Disney movie and awkwardly dodges the question when asked why.

AceShowbiz - Harry Styles has confessed to turning down the role of Prince Eric in Disney's upcoming live-action remake of "The Little Mermaid".

Earlier this year, rumours were swirling that the former One Direction singer had been tapped to appear in the reboot of the 1989 animated classic, although it was later reported the star had opted out of the role.

And speaking with presenters Roman Kemp and Sonny Jay on Britain's Capital Breakfast radio show, Harry opened up about why he walked away from the project.

Explaining he had been approached by the team behind the upcoming flick, the "Lights Up" hitmaker detailed: "I had, you know, a meeting with Rob Marshall the director, who is the most wonderful man, he's great."

"And it was just, honestly, it was just a few things. It just, it wasn't... erm... I think it's gonna be amazing, obviously it's an amazing film, and I can tell Roman's watching how I'm kind of worming."

"No mate!" Roman exclaimed. "It's not… Harry it's because…" as he urged him to answer.

However, Harry took the awkward moment as a way out of the conversation, joking "How's he gonna worm around this one?" as he avoided answering the question altogether.

Harry made his acting debut in Christopher Nolan's Oscar-winning war film "Dunkirk" in 2017, but has yet to build on his screen career. In addition to the Disney project, the star auditioned for the role of Elvis Presley in Baz Luhrmann's biopic of the singer but U.S. actor Austin Butler got the part instead.

Singer/actress Halle Bailey is the only star confirmed for "The Little Mermaid" so far, which begins production next year.

Kacey Musgraves In Talks to Join 'The Little Mermaid' 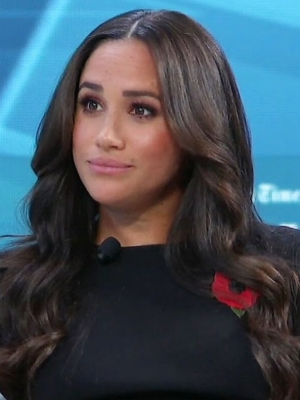