The 'Mean Girls' actress sends tongue wagging after she shared an Instagram message that suggested 'The Masked Singer Australia' winner was 'settling for less' by dating the 'Malibu' singer.

AceShowbiz - Lindsay Lohan has clarified a social media message that appeared to slam Cody Simpson for "settling for less" by dating Miley Cyrus over her own sister Ali Lohan.

The 33-year-old took to Instagram to share a picture of Cody, who won the Australian version of hit TV series "The Masked Singer" earlier this month, and Ali together.

Underneath, Lindsay wrote: "When you realise you failed. And you settle for less @codysimpson family is everything you won the masked singer but you lost on your future". 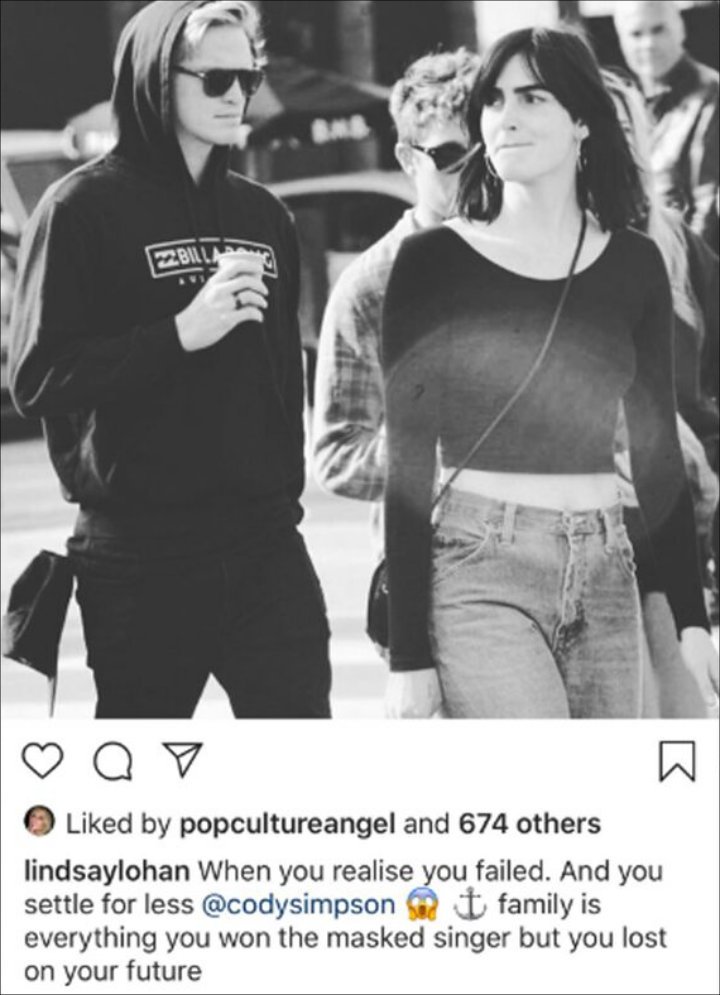 The "Mean Girls" star, who was a judge on the series, deleted the image and comment just seconds after posting it.

On Friday, October 25, the actress explained to TMZ there is no animosity between herself, Simpson, and Cyrus. She also insisted her previous message was an "inside joke".

"I've always loved Miley Cyrus," she said. "Cody is a great guy. I think, you know what, he and her look happier together than ever and I think that's the most important thing, is being happy".

Cody and Ali dated last year, following his split from model Gigi Hadid. However, their romance only lasted a matter of months.

Cody and Miley went public with their relationship at the beginning of the month, and haven't been shy in flaunting their love for one another since - with regular posts and sexy selfies on social media.

Lindsay Lohan Sued for Breach of Contract Over 2014 Memoir Deal