The 'Lock Stock and Two Smoking Barrels' actor will be competing in the live finals of the singing competition after getting a call from Simon Cowell at the end of its final audition episode.

AceShowbiz - Vinnie Jones is to donate any money he wins on U.K. reality show "The X Factor: Celebrity" to the hospitals that cared for his late wife.

The "Lock Stock and Two Smoking Barrels" star signed up to compete for a recording contract on Simon Cowell's star-studded reboot of his singing contest earlier this year, but his participation was thrown into doubt by the death of his wife Tanya from cancer in July.

Vinnie decided to soldier on and compete in the show, and was given a free pass to the live finals, which get underway on Saturday, October 26. Now he has announced that if he bags the recording contract, any money he makes will go to two hospitals that treated Tanya during her life.

"I've decided any proceeds of a record contract from 'X-factor' will go to Harefield hospital and Cedars Sinai," he tweeted on Tuesday. " NOW im (sic) ready to Rock n Roll." 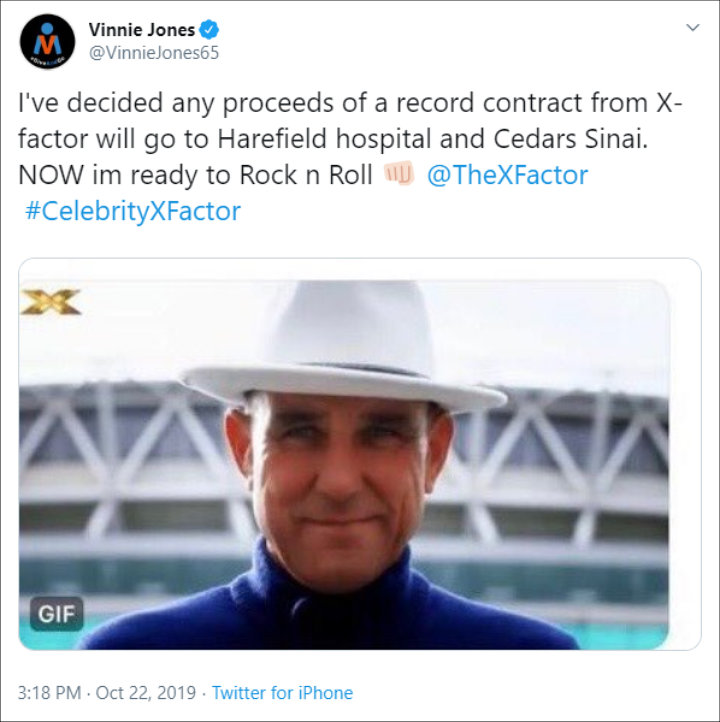 Tanya was treated at Cedars-Sinai Hospital in Los Angeles before spending her final days at the couple's Hollywood home. She underwent a heart transplant at Harefield Hospital in England at the age of just 21 following the birth of Kaley, her daughter from a previous marriage.

Vinnie previously told the Daily Express in 2010: "Harefield is much more precious to us than Hollywood. Tanya's got huge affection for the hospital and thinks so much of everyone there. For us they aren't doctors and nurses, they're angels."

Simon called the former soccer star to offer him a place in the finals at the end of last week's final audition episode. Vinnie will be mentored by Nicole Scherzinger on the show, as he competes alongside 11 other acts for that coveted recording deal.

Will Smith, Helen Mirren Help Fight Homelessness by Asking Fans to Sleep Outdoor for One Day