The 'Hate It or Love It' rapper claims he tried to avoid using Nipsey's likeness while marketing his new label and that he got the blessing of the late rapper's brother to use Prolific as the name of his new label.

AceShowbiz - The Game has responded to accusations that he exploited Nipsey Hussle's name for his own financial benefit. The Compton rapper took to Instagram Stories to set the record straight on his decision to use the name of the late star's face tattoo, "prolific," as the name of his new label, Prolific Records.

"The use of the world 'Prolific' by myself is the only way of helping to carry on my bro's legacy," he posted on Thursday, October 17. "Any merch that has been sold has my face on it, my albums is all pictures, logos etc are related to THE GAME. Out of love for Nip, Blacc Sam and his immediate family etc."

He went on claiming, "I purposely did not include any pics of Nip nor his likeness & directed all traffic to @themarathonclothing as I've done since bro's passing. I've spoken closely to 'Blacc Sam' every step of the way & have had his blessing with things I've done to help honor bro's name and continue his legacy." 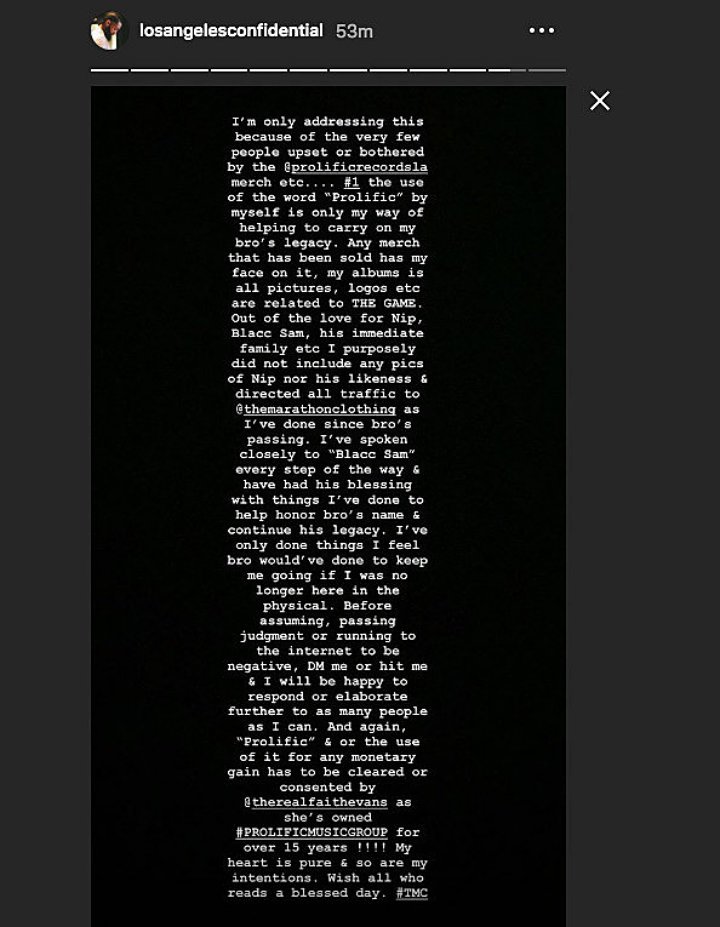 The Game previously faced a backlash after announcing that his new label's merchanside sold out, reportedly within 30 minutes of its release. "Hood morning (no typo)... 30 minutes from now @prolificrecordsla will have a full RE-STOCK of everything," he posted on Instagram on Thursday. "Sorry for yesterday, I tried to respond to as many DM's as possible due to all items being completely SOLD OUT !!!! CLICK THE LINK in my bio or go to theprolificrecords.com to buy your gear NOW #PRLA."

Among those who called out the "Hate It or Love It" hitmaker was Nipsey's affiliate BH, who wrote on his Instagram Story, "Tha type of s**t clowns n***as do @losangelesconfidential you a clown." Another Twitter user reacted, "The Game is really doing his best to profit off of Nipsey Hussle lol he's sick. Even Nips friends are mad about it."

Other critics wrote things like, "The Game been corny af and doing the most since Nipsey death. Selling t-shirts and starting a record label called Prolific Records isn't shocking he's a clown," and "Watching The Game try and eat off Nipsey's legacy is sick to watch smh."

Report: P. Diddy and Lori Harvey Split Because of His Kids

The Game Asks Fans to 'Pray for Me' in Heartbreaking Post