The former Oasis member reportedly popped the question to music manager Debbie Gwyther in late August while holidaying on Italy's Amalfi Coast with his mother as a witness.

According to British newspaper The Sun, the rock and roll star, 46, popped the question to Debbie late last month (August 2019) while holidaying on Italy's Amalfi Coast.

Liam appeared to confirm the news on Twitter on Monday (September 02), responding to one fan who asked who would witness his wedding by writing: "Seriously how do you know we're getting married." 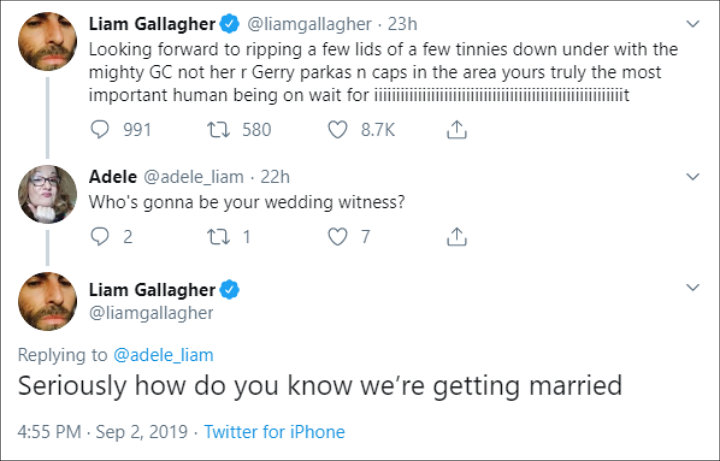 Liam Gallagher appeared to confirm engagement news of him and Debbie Gwyther.

A music industry source tells The Sun that the "Wall of Glass" hitmaker's beloved mother Peggy was present for the proposal.

"His mum Peggy was chuffed to bits to be present at the proposal and fully approves of his relationship with Debbie," the insider reveals. "The couple are hoping to tie the knot next year and Liam wants his kids by his side on the big day."

The marriage will be Liam's third, as he was previously been married to actress Patsy Kensit, and fellow musician Nicole Appleton.

The source tells the newspaper that Debbie is delighted they are finally to marry after six years together, and is already making wedding plans.

"Debbie is over the moon and still in shock that Liam has finally popped the question. It's been on the cards for a while so she's buzzing that it's going ahead. They feel stronger than ever and he is in a really good place," the insider adds.

"His music is going really well and he has a really strong bond with his oldest three kids, thanks to Debbie. Liam credits her for really turning his life around and is grateful that she has stuck by him."

The former Oasis frontman's relationship with Debbie helped him recover from a low point following Oasis' 2009 split and the failure of his own band Beady Eye. However, Debbie helped him launch a solo career, and his relationship with the older three of his four kids, Molly, 22, Lennon, 19, and Gene, 18, was the subject of a recent documentary film, "Liam Gallagher: As It Was". Liam also shares six-year-old daughter Gemma with American journalist Liza Ghorbani.