Stressing that she will never support 'such disgusting' misogynistic message, the 'Space Cowboy' singer claims to have reached out to the 'Bad Blood' hitmaker to explain the situation.

The 30-year-old country singer reached out to the "Bad Blood" hitmaker and explained that her Twitter account was compromised.

Musgraves took to the social media on Saturday, August 10 and denied she intentionally liked the Republican rocker's post.

"yoooo – my account was hacked. I've been working all day and just got on Twitter," she wrote. "Last week I was dragged because of how liberal I am and anyone that knows me knows how outspoken I am about equality & respect. I've connected with Taylor – she knows this is NOT how I feel and we are cool."

And when fans began sharing a screenshot of the Grammy winner liking the post, she claimed it was fake.

"That was a manipulated image, (I don't even follow Kid Rock), and I would NEVERRR support any message promoting such disgusting misogyny," she fired. 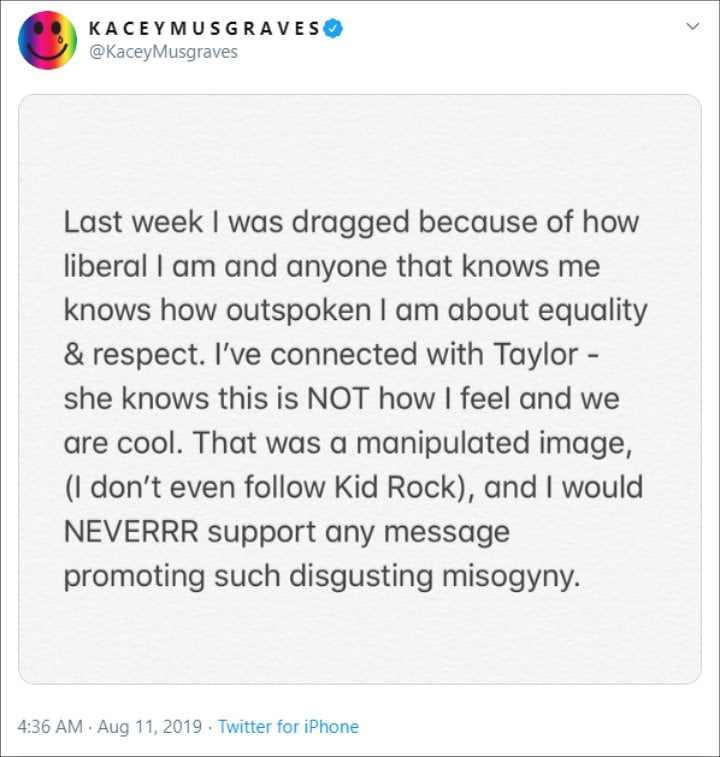 On Friday, Kid Rock blasted Swift for supporting Democratic politicians in the U.S. to further her career.

"Taylor Swift wants to be a democrat because she wants to be in movies....period. And it looks like she will suck the door knob off Hollyweird to get there. Oldest move in the book. Good luck girl," he shared.