AceShowbiz - Scottie Pippen has apparently moved on from his failed marriage, months after his estranged wife Larsa Pippen a.k.a. Larsa Younan filed for divorce for the second time. The retired professional basketball player was spotted with a mystery woman on July 30, sparking a speculation that he has found himself a new girlfriend.

In a picture taken of the two during the outing, the 53-year-old former athlete and the mystery woman, who appears to be younger than him, strolled the street, with her holding onto his arm. The two appeared to be in good spirits, flashing a smile during the walk.

The pair wore color-coordinated outfits, with Scottie sporting a white T-shirt, dark blue pants and white sneakers. His supposed new lady, meanwhile, donned a white T-shirt which was tied up on the waist to reveal her toned midriff, paired with camouflage leggings. She also rocked white sneakers and sunglasses. 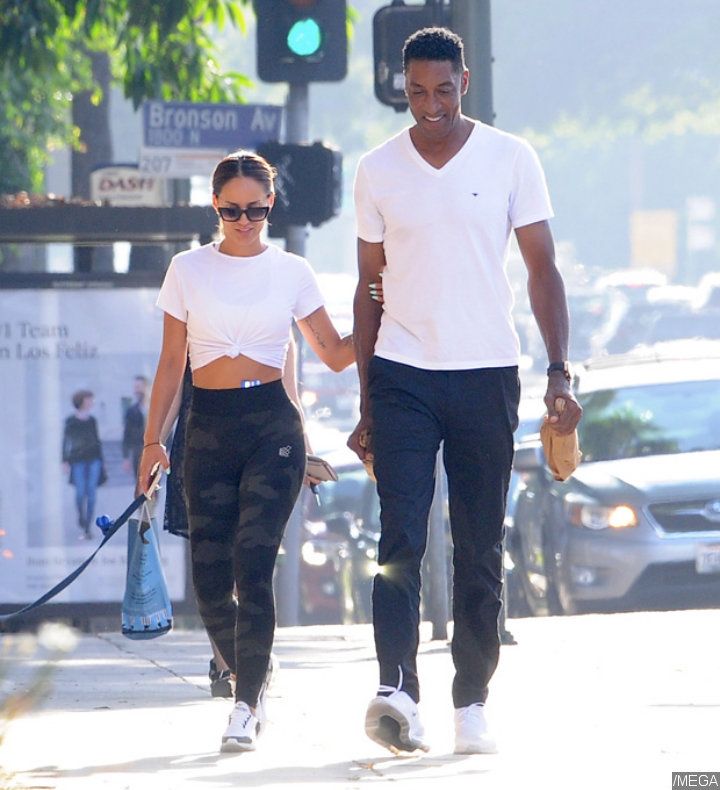 Scottie Pippen and a mystery woman walked arm-in-arm after Larsa filed for divorce.

Scottie and Larsa got married in 1997 and have four children together, Scotty Pippen Jr., Preston Pippen, Justin Pippen and Sophia Pippen. Larsa filed for divorce from the former Chicago Bulls player for the first time in 2016 after police were called to their house twice in three weeks prior to their split announcement for domestic disturbances.

One year after that, however, the then-couple called off their divorce and rekindled their relationship. Larsa filed for divorce again in November 2018, listing October 29 as the date of separation and citing irreconcilable differences as the reason of the split.

"It is with deep sadness that Scottie and I announce that we are legally separating," she said in a statement after filing for divorce for the second time. "We have both tried very hard for a long time to make out marriage work and have ultimately come to the conclusion that it is the best that we live separate lives."

"We have so many amazing moments together, remain best of friends and love each other very much," she continued without detailing their marital issues. "Our four children have always been our priority and for their sake we ask for as much as privacy as possible for our family during this sensitive time."

Larsa later addressed her difficulties during the divorce after she was accused of cheating on Scottie and called a "gold digger." She said on Instagram, "Ppl are so insensitive to my life. I'm a lover and will never say anything negative about him. My soul isn't built for negativity. I'll take a beating publicly ppl saying I cheated when believe me it wasn't like that."

Claiming that Scottie "was no where around" when she needed him, she continued, "I cried oceans after him. I would do anything for him. Ppl saying I'm a gold digger is insane I don't care about money and I've had it my whole life. I spent my bday, New Year's Eve, Times when I needed him alone. At some point i decided I have to live my truth and here I am."