The Blink-182 member has learned that the 20-year-old Echosmith drummer has been sending 13-year-old Alabama Luella party invites and compliments through Instagram.

The Blink-182 star caught wind of direct messages Echosmith drummer Graham allegedly sent to Alabama Luella after she posted images of the exchange on her Instagram account.

Travis, 43, is sickened by the communications and finds Graham's alleged attempts to contact his daughter very disturbing.

"When I found out a 20 year old man was trying to get in touch with my 13 year old daughter by filling her Instagram messages with party invites and compliments I was disgusted," he told The Blast. "That's predatory behaviour and there is nothing cool, normal or ok about it at all."

Graham reportedly reached out to Alabama in 2016, when she was 10 years old, saying "Hi," and "By the way I'm Graham from echosmith and I think ur beautiful."

The youngster didn't respond until he picked up communication again over the summer and sent her an invitation to a barbecue he was hosting in July.

"I just wanted to say i really like ur music and sorry for messaging and I'm 20," he replied.

"Ok but u understand I'm a child?" the last message from Alabama reads.

The teenager shared those messages on Instagram, writing over images of the exchange, "Hey guys! So once again I am bringing this to your attention because I'm a 13 year old girl and he is 21/20 super creepy." 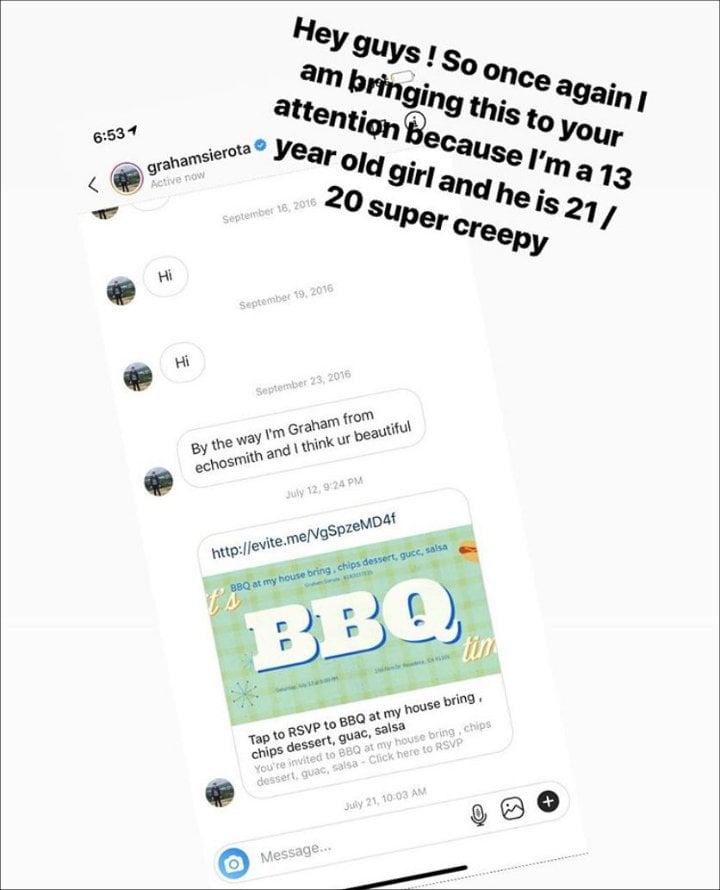 UPDATE (Aug. 1, 2019): Graham Sierota has apologized after Travis Barker called him out for texting his teen daughter. Read his statement here.

UPDATE (Aug. 2, 2019): Alabama Barker has taken to Instagram Stories to state that she accepted Graham Sierota's apology for direct-messaging her. Click here to read her post.

Travis Barker Gets His Kids' Blessing to Marry Kourtney Kardashian