Victor Boyce, the father of the late 'Descendants' actor, announces the establishment of The Cameron Boyce Foundation that aims to provide young people with creative outlets as alternatives to violence.

AceShowbiz - Cameron Boyce's family have announced the launch of The Cameron Boyce Foundation - a charitable organisation set up in memory of the late actor.

The 20-year-old screen star, who suffered from epilepsy, had a seizure and died in his sleep earlier this month. On Tuesday, July 16, Cameron's father Victor took to Twitter to reveal the establishment of the foundation, which will "provide young people with artistic and creative outlets as alternatives to violence and negativity and uses resources and philanthropy for positive change in the world."

"Now is the time to make a change. Donate what you can. Encourage your friends and family to do the same. Let's keep Cameron's legacy alive and make a positive difference in the World," Victor tweeted. 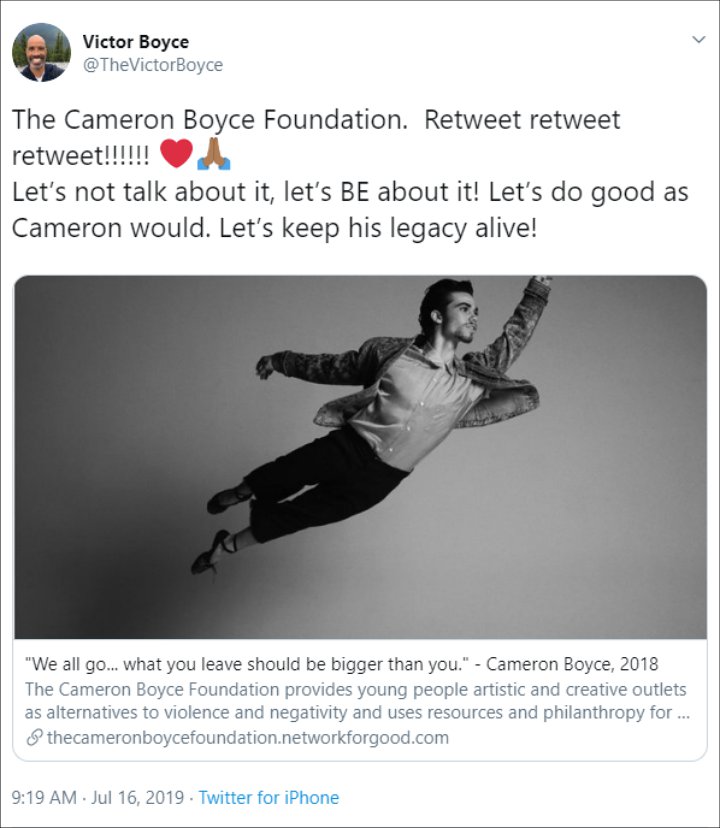 Cameron was an active philanthropist during his short life, and spent his spare time raising money for non-profit organisations such as the Thirst Project, which raises awareness about the global water crisis.

He had also been working on a new campaign to fight against gun violence, called Wielding Peace, and it will now be launched posthumously. Writing about the campaign in a letter provided by Cameron's representative to People.com, the "Descendants" star wrote: "I've named the concept Wielding Peace. It will be a collection of images that feature people from all walks of life (celebrities, victims of gun violence, common supporters) wielding 'guns.' The catch is, the 'guns' that we're using as props will be items that signify unity and peace."

"Household items such as musical instruments, cameras, food, sporting equipment, beauty products, articles of clothing... anything that might inspire someone creatively as well as make a strong statement with the sentiment that we need to choose a different weapon."

Explaining their decision to launch the foundation to People, Victor and wife Libby said: "We are making every effort to move forward and ensure that Cameron's legacy and all that he stood for is honoured.

"He was and is, so cherished and we will hold him in our hearts forever. He is our shooting star."