Through a series of Twitter posts, Emma Gonzalez calls the violent promo an incorrect way to talk about gun violence, and slams the 'Medellin' hitmaker for not giving Pulse survivors a warning.

AceShowbiz - A survivor of Florida's Marjory Stoneman Douglas High School massacre has blasted Madonna for releasing a video featuring a graphic shoot-out at a nightclub.

Madonna released the promo for "God Control" last week (ends June 28) and hoped the violent scenes would rally fans behind America's gun law reform campaign, but instead it has traumatised a teen caught up in a real-life 2018 tragedy.

Emma Gonzalez has taken to Twitter to give the pop superstar a piece of her mind, "Madonna's new video for her song #GodControl was f**ked up, it was horrible. This is NOT the correct way to talk about gun violence."

"Unlike how many fans have been exclaiming - people who have been working in the GVP (Gun Violence Protection) community know how to talk about gun violence, not most celebrities."

"If you want to support the gun violence prevention movement, donate to the places who need it, in this case the One Pulse Foundation and listen to the actual stories from actual survivors of gun violence...."

Gonzalez also feels for the survivors of the 2016 Pulse Nightclub massacre in Florida, because Madonna's hardcore new video appears to revisit the tragedy.

"(She) should have sent out a message warning what her new video contained, ESPECIALLY to the Pulse Victims, ESPECIALLY as it was released Just After the Anniversary on June 12th." 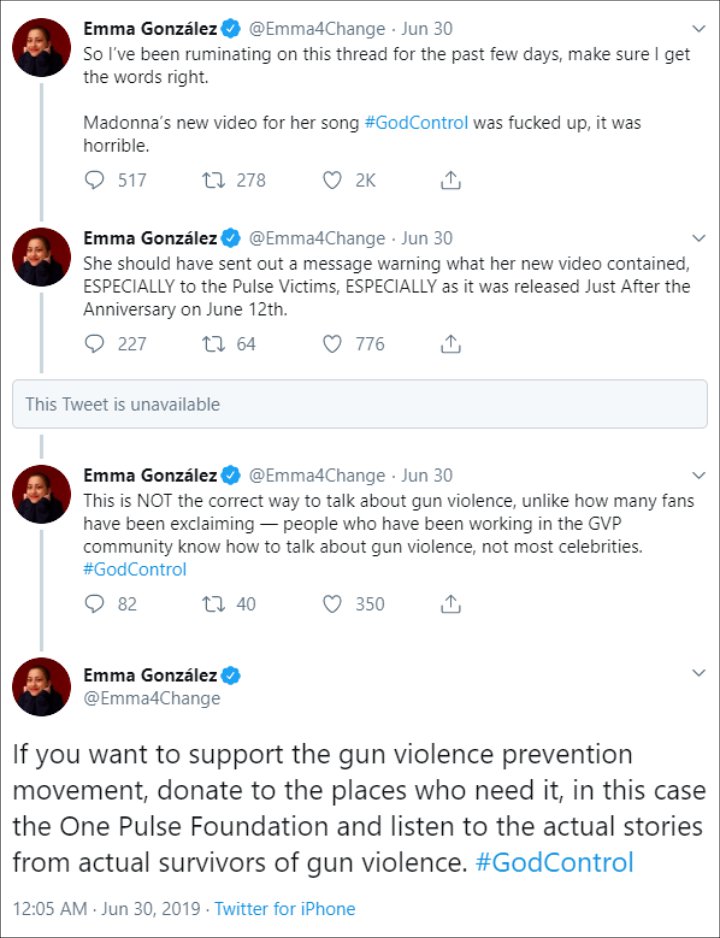 Madonna Recalls Her Younger Days as Broke and Struggling Artist