The 'Barbie Dreams' rapper turns to Twitter to share her piece of mind after coming across Music News Facts' report suggesting that the 19th annual show recorded its lowest-rating broadcast.

AceShowbiz - Nicki Minaj has mocked bosses behind the "messy" 2019 BET Awards after reports suggested Sunday's, June 23 show was the lowest-rated broadcast in the network's history.

According to data published on the Music News Facts social media page, this year's prizegiving only drew two million viewers, marking an all-time low for the U.S. channel since records began in 2006. 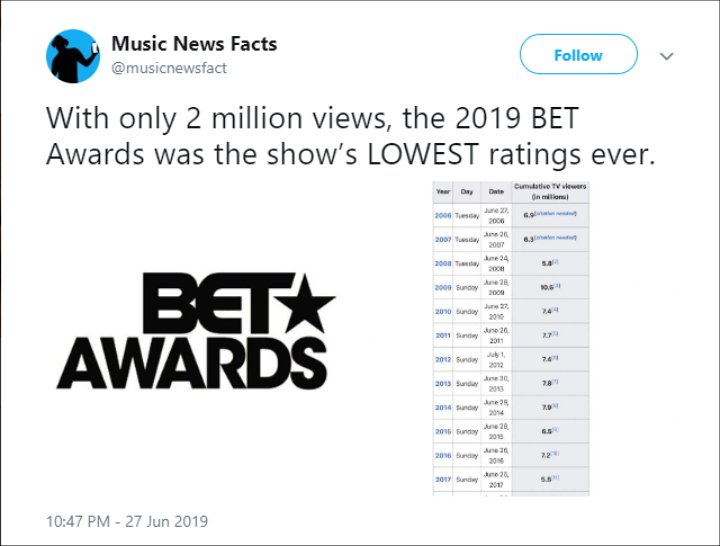 The information drew Nicki's attention and she didn't hesitate to share the unconfirmed post on her Twitter page on Thursday, while also taking aim at "spiteful" TV officials.

Alongside the figures, she wrote, "When u go out of ur way to b spiteful & hurt artists who have always supported ur show... when you fire great ppl (people) who have put their heart & soul into the show... when you'd rather be a messy reality show than a prestigious award show...."

"when ur still being dragged by that lace (wig) (sic)," Nicki added, referencing a snide tweet posted on the official BET account back in February, which had been directed at her after her rival Cardi B triumphed at the Grammy Awards. 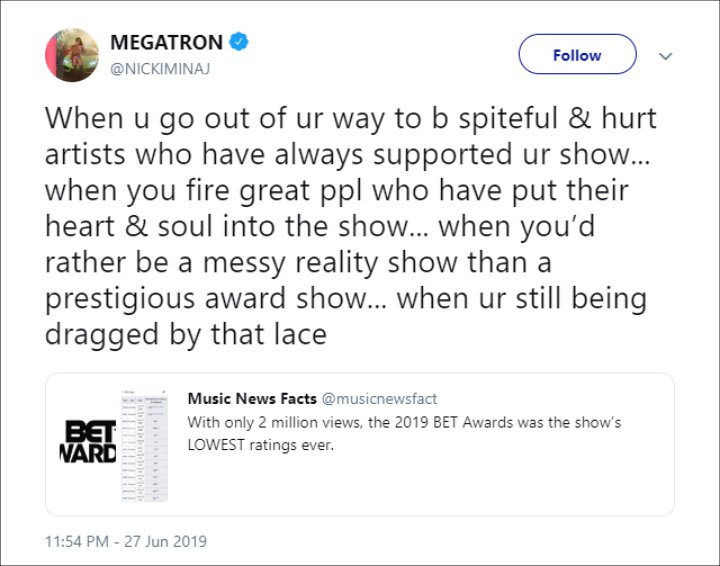 The message in question read, "Cardi B is The First Solo Female Rapper To Win Best Rap Album, And Fans Are Weeping. Meanwhile, Nicki Minaj is being dragged by her lacefront (wig)."

The pointed remark was quickly deleted, but the damage had already been done as Nicki and labelmate Lil Wayne subsequently pulled out of plans to perform at the BET Experience event, staged in the lead up to the BET Awards.

Network officials, who issued a public apology to the "Starship" hitmaker and insisted the tweet was unauthorised, have yet to respond to Nicki's ratings dig.

Mod Sun: Bella Thorne and I Got Engaged, Married and Divorced in Less Than Two Years