In the episode, Camille Grammer drops bombshell about Dorit and her husband's apparent finance issue she tells Dorit that her husband, PK, owes a dear friend of hers a lot of money.

AceShowbiz - "The Real Housewives of Beverly Hills" returned with a new episode on Tuesday, June 25. The episode saw cast members of the Bravo reality show discussing Lisa Vanderpump's absences in many of events held by the other cast members as she skipped out on filming the show with others.

"There's been a certain thing this year with a friend of ours that we haven’t been able to move through," Dorit Kemsley told Camille Grammer, Erika Girardi, Kyle Richards, Lisa Rinna, Teddi Mellencamp and Denise Richards after an event for her Beverly Beach clothing line.

When Kyle asked if anyone had seen the restaurateur lately, Dorit responded, "No, she's chosen not to see any of us. She's had endless invites and has not turned up."

The ladies also talked about how Lisa comfortably skipped Camille's bridal shower and wedding. "She should have come," said Camille. However, Lisa Rinna didn't think that Camille was hard enough on LVP regarding her response about the situation in an interview with PEOPLE. "You let her off the hook. You shouldn't have let her off the hook so easily," Lisa Rinna said, to which Camille responded, "I guess I was weak then."

But Denise came to Camille's defense. She called out Lisa Rinna for being too hard Camille. "This isn't fair to her. She just lost her f***ing house. Why are we talking about this right now? Seriously, just let it go," she said.

In the episode, Camille told Dorit that her husband, PK, owes a dear friend of hers a lot of money. Dorit looked shocked, which made Camille think that PK didn't tell anything about the money issue with his wife. Things quickly got awkward and the ladies decided to shut down the conversation.

Emma Stone Injures Her Shoulder After 'Slipping on a Floor,' Not at Spice Girls Concert

Kyle Richards on Upcoming Season 10 of 'RHOBH': 'They Do Break the Fourth Wall' 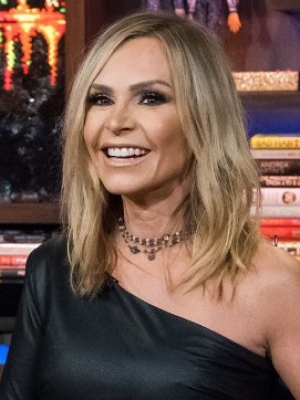