Reigniting her feud with the 'Australian Idol' winner, the 'Black Widow' rapper takes to Twitter to point out similarity between the promos of her 'Saviour' track and his newly-released single.

AceShowbiz - Iggy Azalea has reignited her feud with Guy Sebastian, this time calling out the star's visuals for his latest single "Choir".

The 37-year-old took to Twitter on Monday, June 17, to tease the clip, which takes place in a church and features Christian-inspired imagery, including halos and crosses. And referencing the apparent similarities between Guy's teaser and the rapper's own "Saviour" music video, Iggy tweeted: "Why bother when my saviour video already exists?" 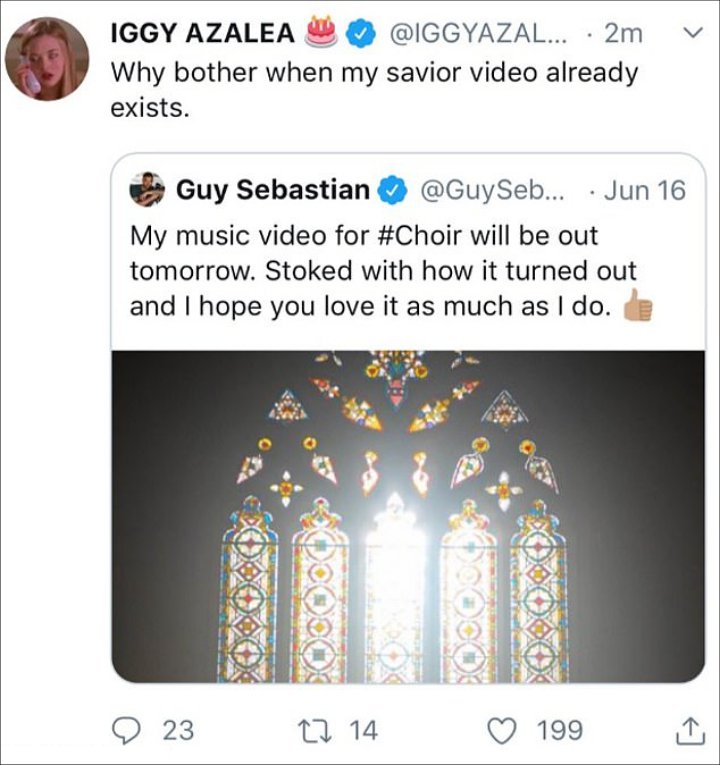 The rapper swiftly removed the post, but took another swipe at the Australian hitmaker the following day, this time sharing a GIF of a woman recoiling in horror after being handed a brown felt hat - a reference to Guy's habit of wearing fedora hats.

The beef began after Iggy and Guy butted heads when they worked together on the judging panel for the final series of "The X Factor" Australia in 2016 alongside Adam Lambert and Mel B (Melanie Brown). And last month he slammed her for not being "invested" enough in the role.

Responding to Guy's accusation, the "Fancy" star tweeted: "I don't actually give a f**k about other people's opinions; I just can't turn down the chance to tell someone they're a dumb b**ch. She continued: "It's in my blood & there is no cure!"

Iggy, 29, joined the talent show as a replacement for judge Dannii Minogue who had occupied a seat on judging panel since 2013. But after a year of disappointing ratings after she joined, the show was axed.

James Corden Mulls Over Leaving 'The Late Late Show' in 2020