Returning to the London venue for their reunion tour, the 'Spice Up Your Life' hitmakers treat concertgoerts to their onstage playfulness during the performance of 'Goodbye' and 'Wannabe'.

AceShowbiz - The Spice Girls have called out former bandmember Victoria Adams for snubbing their invite to the band's first Wembley Stadium gig.

The "Spice Up Your Life" hitmakers played the first of three nights at the London venue on Thursday, June 13, as part of their "Spice World - 2019 Tour", and Geri Halliwell was overcome with emotion during a moving performance of "Goodbye" - which was released by the band when Ginger Spice sensationally quit back in 1998.

Poking fun at her quietness on stage, bandmate Melanie Brown a.k.a. Mel B said, "Why are you so quiet? Have you ever known Ginge so quiet?"

Geri admitted she was thinking about the time the band performed without her at Wembley Stadium in 1998 following her departure.

"I was gutted they were doing it without me," the 46-year-old told fans. "Then 21 years later to come back and be doing it together with you lot."

Unwilling to let the opportunity pass, the rest of the band quipped, "I wonder if Victoria feels like that right now!"

That wasn't the only dig the band made, however, as when Mel B rapped the iconic bridge to the band's breakout hit "Wannabe", Geri followed the line "Easy V doesn't come for free, she's a real lady" with the cheeky remark, "Where is she?"

When Geri, Mel B, Melanie C a.k.a. Mel C and Emma Bunton announced plans to hit the road last November (18), the fashion mogul decided to pass on the opportunity, citing her other work commitments.

Although fans hoped to see Posh at the gig in the U.K.'s capital, their dreams were quashed when the star posted snaps of herself on Instagram in Los Angeles, California shortly before the show was due to begin.

The "Spice World - 2019 Tour" wraps up at Wembley Stadium on Saturday. 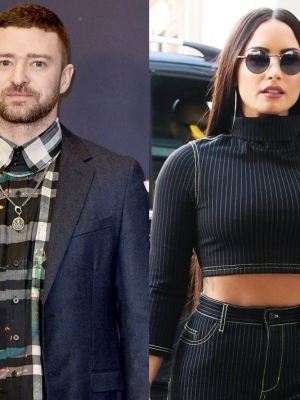