When weighing in on his co-star's angry reaction to the ABC comedy series' renewal, the actor known for his Louis Huang portrayal admits that he himself was prepared for it to not get picked up.

AceShowbiz - Randall Park has weighed in on his "Fresh Off the Boat" co-star Constance Wu's recent controversial tweets about the show's renewal, insisting he can "understand" where she was coming from.

The "Crazy Rich Asians" star hit the headlines in May when she reacted angrily to the news the programme had been picked up for a sixth season on Twitter, writing: "So upset right now that I'm literally crying. Ugh. F**k."

Constance Wu reacted angrily to 'Fresh Off the Boat' renewal.

She followed that with another tweet which read: "F**king hell", before explaining to fans that she hadn't been expecting a renewal, and that it meant she had to turn down another project about which she was very passionate. 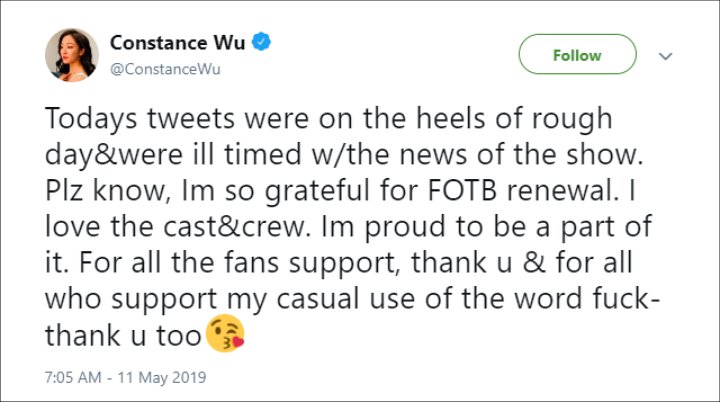 Park, who stars opposite Wu in the programme, based on Eddie Huang's memoir about his family's move from Washington, D.C.'s Chinatown to Orlando in the mid-1990s, had his say on the scandal as he appeared on Marc Malkin's podcast "The Big Ticket".

Following Wu's tweets, it was rumoured that she might be recast in the show. However, ABC bosses later insisted they couldn't think of anyone else to play the role of Jessica Huang.

"There's been no thought to recasting Constance. We love what she does on the show," network president Karey Burke said. "I did actually know that Constance had another opportunity had 'Fresh Off The Boat' not gone forward she would have pursued. But we never really considered not bringing back 'Fresh Off The Boat', it was just too strong."

"I'm going to choose to believe Constance's most recent communication about the show that she's happy to return and the cast and crew is happy to have her back."