The 'Thank U, Next' hitmaker has bequeathed the nonprofit organization an estimated $300,000 she made from her 'Sweetener' concert at State Farm Arena in Atlanta, Georgia.

AceShowbiz - Ariana Grande has donated the proceeds from her recent concert in Atlanta, Georgia to Planned Parenthood, as protests continue against the state passing strict anti-abortion legislation.

The singer performed at the city's State Farm Arena on June 8 as part of her "Sweetener World Tour", with thousands of fans packing into the venue to watch the star take to the stage. Following the sold-out gig, Ariana decided to make a stand by donating the estimated $300,000 (£236,000) she made from the concert to Planned Parenthood - a nonprofit organisation that provides sexual health care in the U.S. and around the world.

The move is part of Ariana's stand against the passing of strict new legislation, termed the "heartbeat bill", in states such as Georgia, Louisiana and Alabama, with the law prohibiting abortions from the time a foetal heartbeat is detected - usually when a woman is about six weeks pregnant. 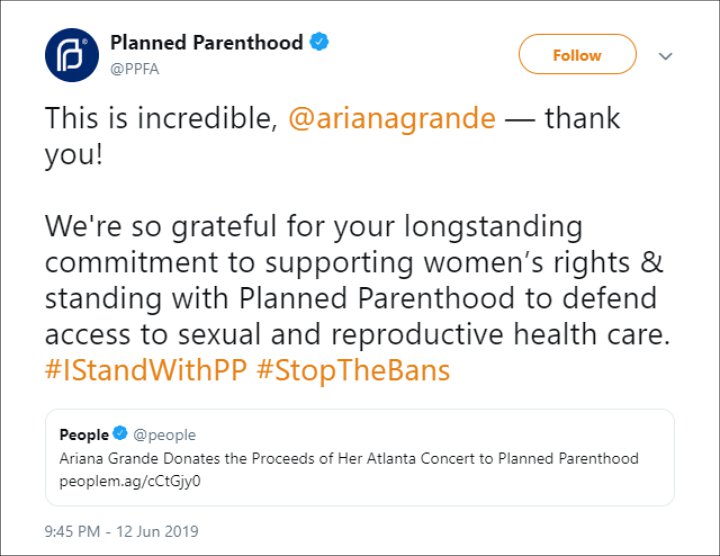 "This is not what the American people want, nor is it something they'll stand for, Thanks to inspiring support like hers, Planned Parenthood can continue to fight back - in the courts, in Congress, in state houses, and in the streets - against these dangerous attacks on people's health and lives. We are so grateful to Ariana for her longstanding commitment to supporting women's rights and standing with Planned Parenthood to defend access to reproductive health care. We won't stop fighting - no matter what."