When responding to fans' constant question over her return to the hit crime drama series, the Abby Sciuto depicter finally points finger at the leading man for her 'multiple physical assaults.'

The actress caused a stir online over the weekend (June 07-09) after going public with the feud which led her to quit her 15-year role as forensic specialist Abby Sciuto.

After her final episodes aired last year (2018), Perrette took to Twitter to shed a little light on the situation behind the scenes, stating her departure was related to "multiple physical assaults" she had experienced in the workplace.

She didn't name names at the time, but on Friday night, she pointed the finger at co-star Harmon as she urged fans to quit asking her when she will return to "NCIS".

"NO I AM NOT COMING BACK! EVER! (Please stop asking?)," she tweeted. "I am terrified of Harmon and him attacking me. I have nightmares about it."

"I have a new show that is SAFE AND HAPPY!" she added of her upcoming series "Broke". "You'll love it! #HappyPlace Love y'all (sic)!". 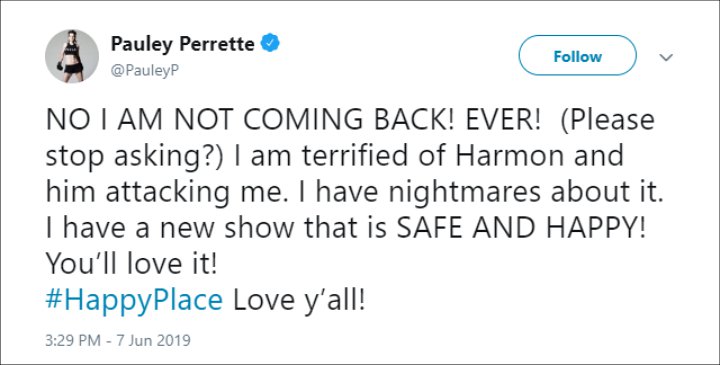 Pauley Perrette urged fans to stop asking her when she would return to 'NCIS'.

Perrette went on to share close-up photos of the facial injuries one crew member allegedly suffered following a clash onset, and suggested it wasn't entirely her decision to walk away from "NCIS".

"You think I didn't expect blow back? You got me wrong," she continued. "THIS happened To my crew member and I fought like hell to keep it from happening again! To protect my crew! And then I was physically assaulted for saying NO!?and I lost my job (sic)."

Representatives for Harmon have yet to comment on the allegations, while a network spokesperson for CBS simply referred reporters back to the company's original statement following Perrette's departure.

"Pauley Perrette had a terrific run on NCIS and we are all going to miss her," officials wrote at the time.

"Over a year ago, Pauley came to us with a workplace concern. We took the matter seriously and worked with her to find a resolution. We are committed to a safe work environment on all our shows."

Is Wendy Williams Dating New 'Sexy' and Younger Guy? Get the Details 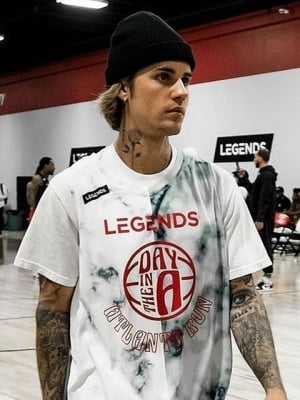