It's Official: Jussie Smollet Not Returning for 'Empire' Season 6

Series creator Lee Daniels has closed the door on the actor's return despite a report that other cast members begged the show's bosses to reinstate Jussie as a regular after he was accused of staging his attack.

AceShowbiz - Jussie Smollett will not be returning to TV drama "Empire" after his run-in with Chicago, Illinois police officials earlier this year.

His castmates urged show creator Lee Daniels and TV bosses to reinstate the actor as a regular after charges against Smollett were dropped in March, but now Daniels has officially closed the door on his return.

"Jussie will NOT be returning to Empire," he said via Twitter on Tuesday, June 04, as rumours of his comeback for the final season of the show started to circulate following a Variety report that suggested writers were trying to work Smollett's character, Jamal Lyon, back into the series. 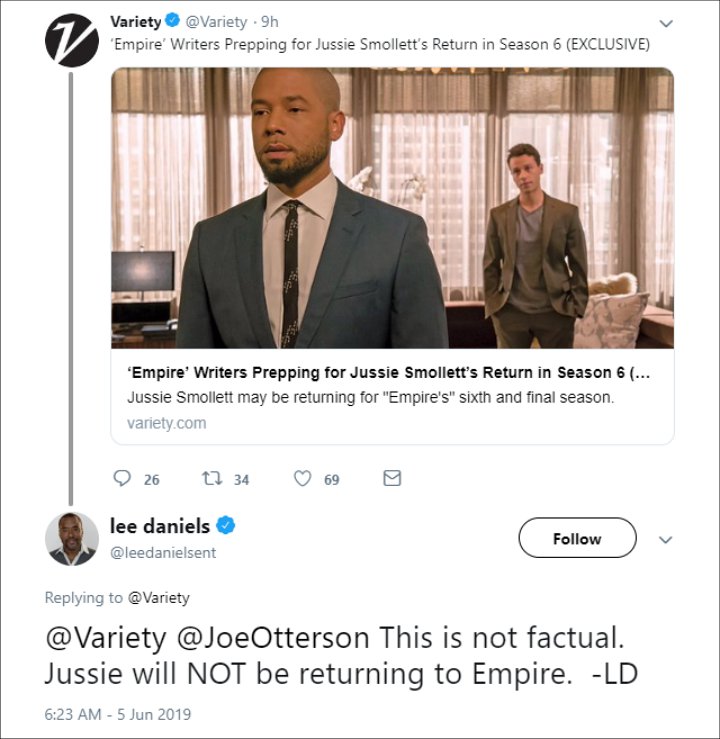 The actor was written out of the final episodes of the show's fifth season following accusations he faked a hate crime against himself in Chicago as a publicity stunt.

Smollett has been sued by city officials, who still believe he wasted police time and forced an investigation into a crime that never was.

"Empire" cast members like Taraji P. Henson and Terrence Howard signed a letter urging executives to bring Jussie back, and when the sixth season was announced in April, TV bosses revealed Smollett's option had been extended even though there were no plans for him to return.

Case files linked to Smollett's legal drama were unsealed last month. Among them were police statements from the Osundario brothers, who claimed the actor paid them to stage the attack. More documents are due to be released later this week, including surveillance videos.

Jussie Smollett in Talks to Return for 'Empire'