After a Twitter user posted a mean comment over the 16-year-old's rendition of 'God Bless America', the 'Breakaway' hitmaker replies with an encouragement to think about what to say online.

AceShowbiz - Kelly Clarkson has jumped to the defence of "The Voice" winner Chevel Shepherd after fans took to social media to slam her performance of "God Bless America" at the 2019 Indianapolis 500 on Sunday, May 28.

Shepherd, who Clarkson coached to victory during season 15 of the reality competition in December (2018), performed the song before the big race and then faced backlash from critics who were far from impressed.

One took to Twitter and labelled the 16-year-old's performance the "Absolute WORST version of God Bless America I've ever heard", tagging Clarkson in the post.

The "Breakaway" hitmaker, who sang a pitch-perfect rendition of the U.S. National Anthem before the Indy 500, was quick to share her praise for Shepherd.

"I didn't actually sing that song today but the 16 yr old girl that did, nailed it," the 37 year old replied to the tweeter's mean post. "Also, think about the fact that U signed in online & took the time 2 drag a 16 yr old girl." 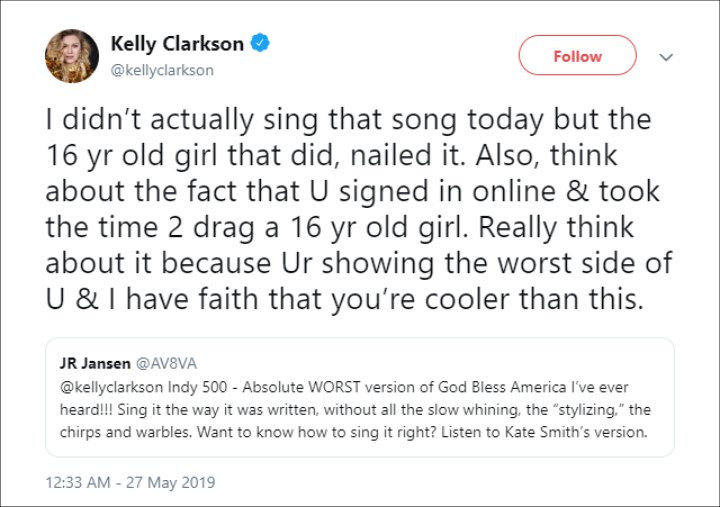 "Really think about it because Ur showing the worst side of U & I have faith that you're cooler than this."