Beth Chapman Calls Out Trolls 'Bullying' and 'Harassing' Her Through DMs

Explaining to her Twitter followers, the 'Dog the Bounty Hunter' star says that the troll slammed her after she ignored her message about 'how she's Battered woman.'

AceShowbiz - Beth Chapman already has a lot on her plates, and one of them is definitely not dealing with online trolls. The "Dog the Bounty Hunter" star recently took to Twitter to call out a troll who sent her angry messages for not replying to her previous text. Not showing any mercy for the said troll, Beth even blocked the user.

Explaining to her followers on the blue bird app, she stated the troll initially sent her a message about "how she's Battered woman." Beth didn't immediately respond to the social media user, so the latter went into rage and sent a follow-up message harassing the blonde star. In a screenshot of their DMs, the troll wrote, "You won't read any of this and won't respond back. Because that's just the way you are."

Dubbing Beth "nothing but a TV personality," the said user continued saying, "You told me to let's talk about it, I really needed somebody but I guess I was wrong again." In response to the message, Beth wrote back, "Really well go get your advise from her cause your blocked here I don't put up with this kinda bulls**t outta anyone bye !"

Beth wrote alongside the screenshot, "She was blocked for these kinda harasing statements she sends me long dms about how she's Battered woman but then flys into rages if you don't immediately get back to her done done done block trolls and demanding fans who think they can bully me into talking to them." 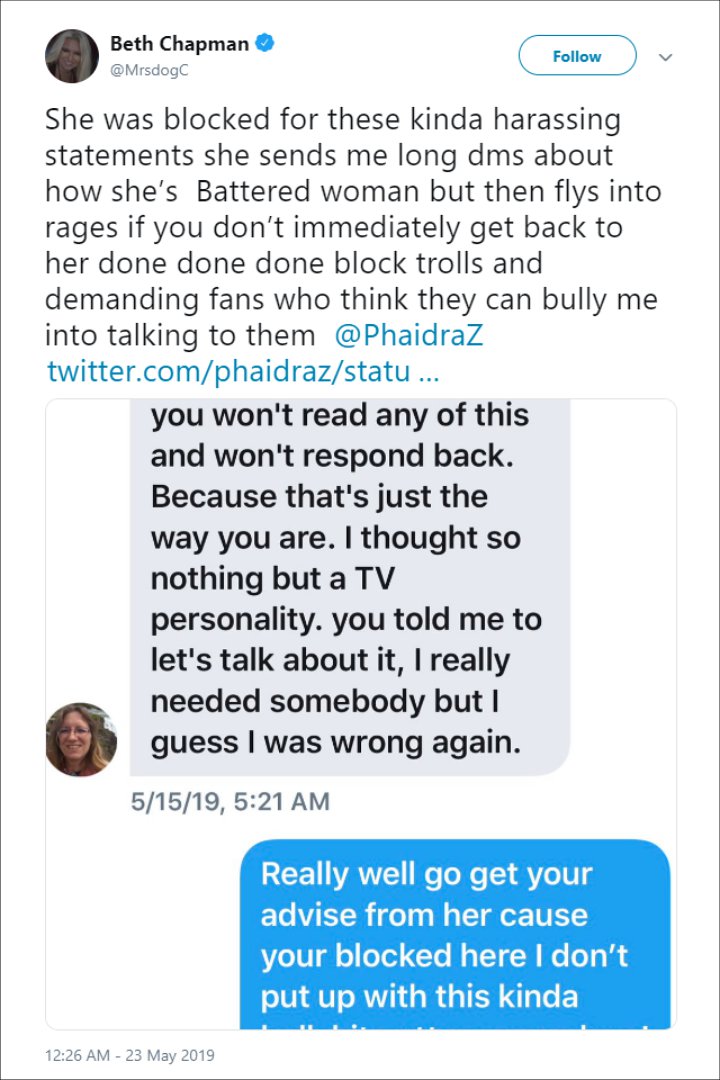 Beth Chapman called out a troll who 'harassed' her on DMs.

Many of her fans have since showered her with support, with some assuring her that she's not obligated to "respond to anyone."

It's truly a good thing that Beth has since blocked the troll and focused on other things, since she already has her cancer battle to worry about. Beth was first diagnosed with stage II throat cancer back in 2017 and had to undergo an emergency surgery when it returned in November 2018.

Teresa Giudice's Husband Joe Allowed to Stay in the U.S. Amid Deportation Battle