The 61-year-old rapper takes to Twitter to send a message to the e-commerce regarding an event that occurs at his house when a delivery man comes with his parcel.

AceShowbiz - Ice-T has something to say to Amazon. The 61-year-old rapper shared on his Twitter account that he "almost shot" a delivery driver from the e-commerce who came to his house as he mistook him for an intruder.

"Message to Amazon: Now that you have regular people making your home deliveries... Maybe they should wear a Vest with AMAZON DELIVERY on it...." Ice-T suggested on the micro-blogging site. "I almost shot a MF creeping up to my crib last night.... Just saying." 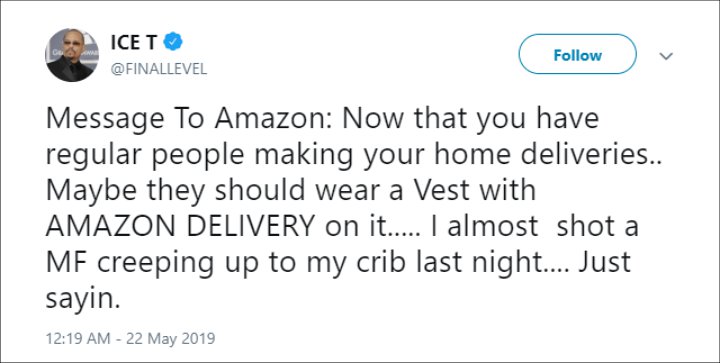 A fan responded to his tweet, asking, "Was he not wearing a delivery man uniform?" to which the "Law & Order" star replied, "No. They don't wear ANY uniform. Just regular people workin… I ain't mad at them. Just saying. That s**t ain't safe."

His complaint didn't go unnoticed by the tech company. Amazon's senior vice president of Worldwide Operations & Customer Service Dave Clark tweeted back to the musician, though the response didn't seemingly show that he was taking it seriously.

"Just sayin…thanks for the suggestion. We MF'ing love you and our drivers. Lots of innovations coming on this and many that already exist to help you track your package and delivery on a map. Thanks for being a customer," Clark said.

People blasted him for the tweet with one user writing, "Putting a patch on a vest isn't an innovation dude it's common freaking sense." Another user chimmed in, "I hope y'all do take the suggestion seriously and consider some sort of identification for drivers or vehicles for the safety of drivers and customers!"

This isn't the first time Amazon had received complaints about their delivery driver. In 2018, a man named Richard Guttfield alleged that an Amazon driver took his beloved 11-month-old black miniature schnauzer. Telling Buzzfeed, Guttfield said that the delivery man entered the house through the unlocked doors instead of leaving the parcel in a safe box along the driveway.

Here Is Robert Pattinson's Response to 'The Batman' Casting Report