The 'Live Free or Die Hard' actor accidentally lets slip an expletive when promoting his new podcast, 'Life Is Short with Justin Long', during an appearance on 'Today'.

AceShowbiz - Actor Justin Long turned the air blue on Thursday, May 16 after letting slip an expletive during a live U.S. TV interview.

The "Live Free or Die Hard" star was promoting his new podcast, "Life Is Short with Justin Long", on America's "Today" show when he got a little too comfortable on air as he discussed his new series, on which he interviews a string of celebrity friends, including Neil Patrick Harris, Olivia Wilde, Dax Shepard and Lena Dunham.

"I feel so lucky, it's been so fun," Long said. "I do it with my brother Christian, who's the funniest person I know, and he writes a lot of the questions and then we just start riffing, it's just a conversation."

Explaining why he decided to dive into the podcast industry, he continued, "These (TV talk) shows are so fun to do, but sometimes you feel rushed, like right now, I gotta get it out...".

Immediately realising his mistake, he gasped and issued multiple apologies as "Today" co-hosts Craig Melvin and Sheinelle Jones laughed off the incident.

Long has since expressed his sorrow once more on social media.

Posting video footage of his appearance on "Today", he wrote, "Thanks for having me... (Sincerest apologies again for the s**t slip. Truly.)" 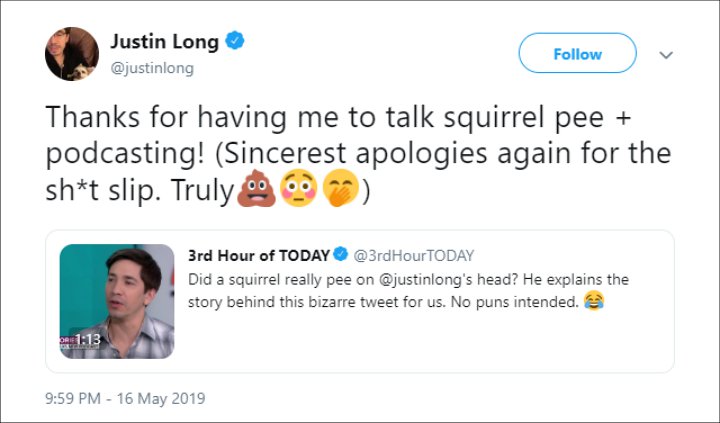 "Life Is Short with Justin Long" launched online on Monday, May 13.