According to an eyewitness, the 'Taste' rapper and his beautiful companion 'were next to each other the whole night and were talking pretty closely' at the Rolling Loud after-party.

AceShowbiz - Tyga has just fueled rumors of him romancing Kylie Jenner look-alike with their latest outing. The 29-year-old "Hookah" rapper was photographed attending a Rolling Loud after-party at E11EVEN Miami on Sunday evening, May 12 with the pretty lady.

For the party, Tyga opted for a bright red tracksuit which he teamed with a pair of platform canvas trainers and sunglasses. Meanwhile, his beautiful companion sizzled in a pair of multi-patterned jeans and a plunging pink bodysuit that highlight her ample bust. Sporting a pair of black shoes, she dyed her hair blue that night. 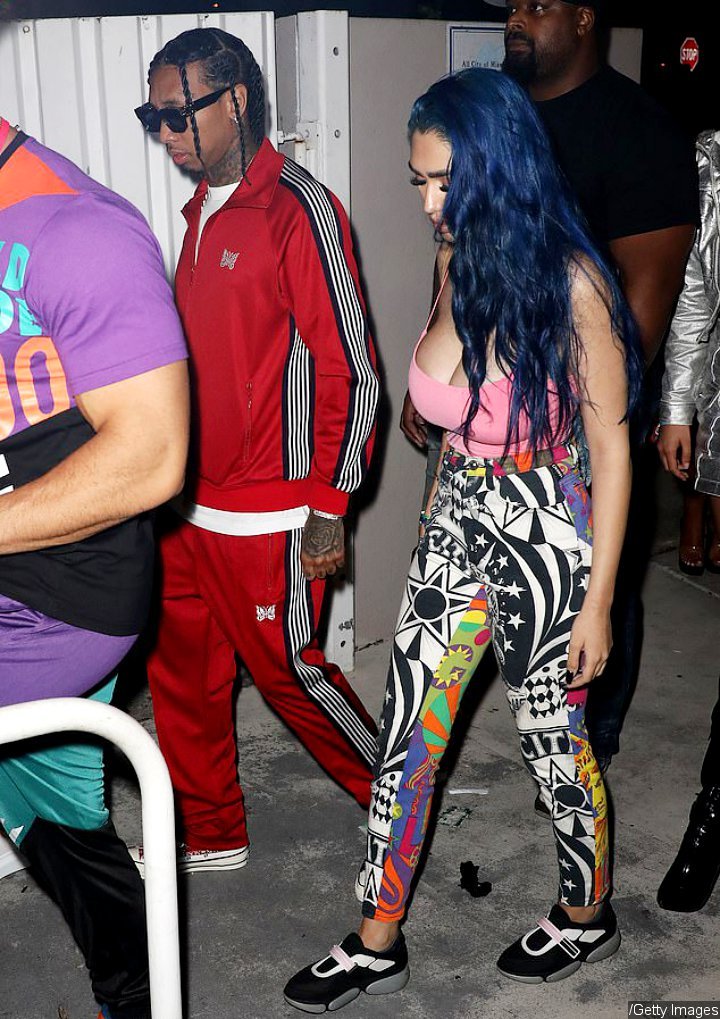 According to Page Six, Tyga and his rumored girlfriend hit up the club around 3 A.M. and they hung out at the VIP area along with the likes of Lil Pump and SmokePurpp. An eyewitness shared to the publication that the alleged lovebirds "were next to each other the whole night and were talking pretty closely. They seemed comfortable with each other."

Tyga also performed during the bash, belting out hits like "Taste", "Dip" and "Faded" before inviting a few ladies to dance with him during a rendition of "Back That A** Up". Following his performance, the rapper allegedly "headed back to his table to party and take shots with his group and a few girls." It was said that Tyga left the party at 6 A.M., though it was unclear whether or not the Kylie look-alike was with him.

Rumors of him dating the mystery lady sparked last week, when they were spotted out and about in Beverly Hills. Tyga and the woman were seen shopping on Rodeo Drive, visiting some high-end stores like XIV Karats and Burberry. They were joined by a bodyguard to ensure their safety throughout the outing.

Prior to being linked with the mystery woman, Tyga dated the likes of Kylie and Blac Chyna. He shares a son named King Cairo with the latter.

This Is John Mayer's Response to Kourtney Kardashian Dating Rumors

'The Voice' Semi-Finals Recap: Eight Singers Compete to Get Into Top 4