Taking to her Twitter account, the supermodel and cookbook author shares a picture of her head pasted on an image of Tom Hanks sporting a khaki scout uniform.

AceShowbiz - Chrissy Teigen is apparently just as confused as the rest of social media users over the theme of this year's Met Gala, which took place at the Metropolitan Museum of Art in New York on Monday, May 6. As a result, the supermodel and cookbook author joined the fun of creating meme about the theme of the event, which was "Camp: Notes on Fashion", on Twitter.

Taking to the micro-blogging site, Chrissy shared an edited image of Tom Hanks sporting a khaki scout uniform. What made it funny was that she cropped her face on the actor's. Referring to the fact that she skipped out this year's event, the "Lip Sync Battle" co-host wrote, "I have arrived." Many of her followers found the picture funny, with one writing, "Finally someone understood the theme." 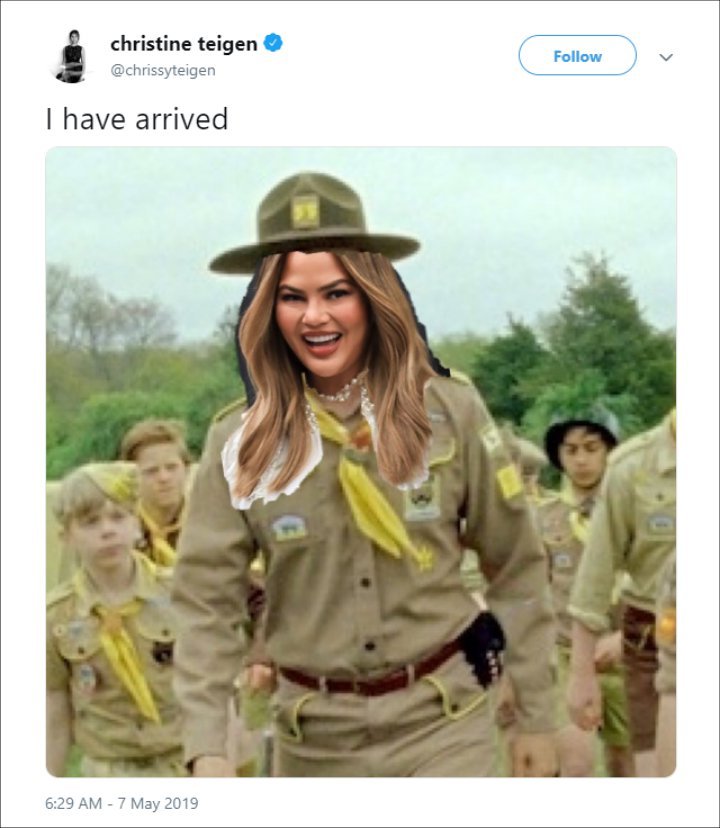 Chrissy Teigen shared a meme of herself to poke fun at the 2019 Met Gala theme.

One other said, "Guess I'm not the only one who thought everyone would show up like this."Someone similarly wrote, "Legit thought this was the theme. I was a little disappointed when I woke up," as another jokingly said, "You slayed it!!! Best look of the night!!!!! Go Chrissy."

Obviously, the theme of the 2019 Met Gala wasn't referring to the actual camping. It was actually a reference to Susan Montag's "Notes on Camp" essay which was published in 1964. In the essay, Susan described the term as "its love of the unnatural, or artifice and exaggeration." Thus, many celebrities showed up in their most unique, yet stunning outfits.

Among them was Katy Perry, who showed up in her double chandelier ensemble that was designed by Moschino. She later traded the outfit for a hamburger costume inside the venue. Meanwhile, Jared Leto stunned as he carried a fake severed head of himself. The actor and singer wore a red Gucci gown with long sleeves and a body jewelry piece.