In a series of Twitter posts, the 'Upside Down' hitmaker vents her frustration at the 'over the top' treatment she received from a female officer, complaining further that she felt 'violated.'

AceShowbiz - Diana Ross has lashed out at an airport security official in New Orleans, Louisiana after she was left feeling "violated" by a full-body pat-down.

The legendary musician was flying out of the city early on Sunday, May 05, hours after performing at the New Orleans Jazz and Heritage Festival on Saturday night, when she dazzled fans with her hits-packed debut.

"I love New Orleans it was an incredible night at the jazz fest (sic)," Diana tweeted after the show. 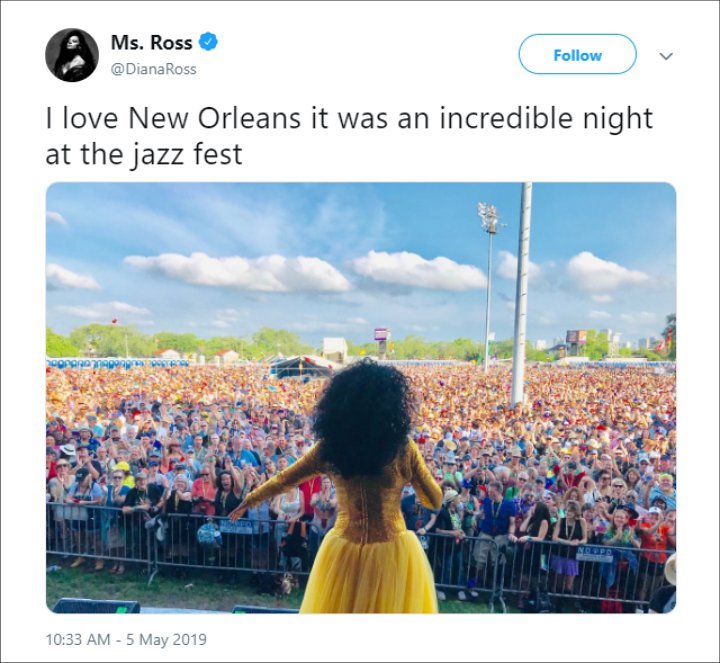 However, her trip soon turned sour as she was pulled aside at the airport for a more thorough check by a female Transportation Security Administration (TSA) officer.

The 75-year-old claims she was treated terribly during the search, and took to Twitter to vent about the alleged incident.

"OK so on one hand I'm treated like royalty in New Orleans and at the airport I was treated like s**t," she complained.

Branding the TSA agent's reported actions "over the top," Diana admitted she was almost reduced to tears.

"Makes me want to cry !!!" she continued. "Its not what was done but how , I am feeling violated - I still feel her hands between my legs , front and back ( saying to me it her job,) WOW!!really mixed emotions I always like to see the good things but not feeling good right now (sic)." 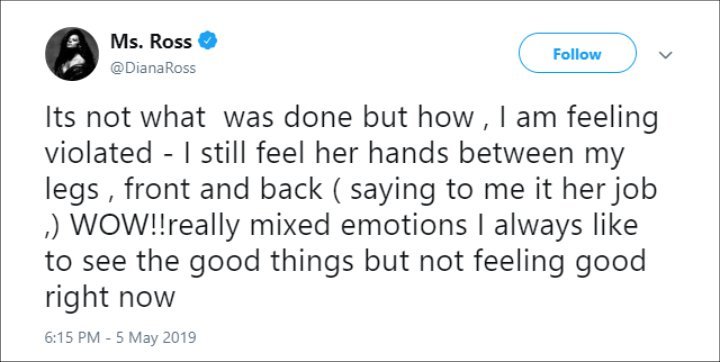 The singer managed to pull herself together and hours later, shared a clip of herself onstage and assured fans she was "feeling better."

It's not the first time the "Upside Down" icon has been left furious at TSA officials - last summer (18), she took issue with agents who had pulled her luggage aside for a more thorough security search.

"I can't say that I like it when strangers go through my personal luggage at the airports and then they NEVER put my things back the way I packed them," she tweeted. "it feels like a violation. And I know I can't do anything about it! OUCHES (sic)!!!!"