The British actress reveals in a new interview that she initially doubted that her character Arya Stark deserved the heroic moment in the Sunday, April 28 episode of the eighth and final season.

AceShowbiz - The latest episode of "Game of Thrones" season 8 was undoubtedly a big episode for Arya Stark (Maisie Williams) as she was seen doing something heroic that turned the table for the entire series. While some fans were praising Arya and her arc, Maisie's own boyfriend appeared to be unimpressed.

The British actress revealed to Entertainment Weekly that she doubted that her character deserved the heroic moment in the Sunday, April 28 episode of the eighth and final season of the hit HBO series. The disappointing reaction from Ollie Jackson didn't help either.

[SPOILER ALERT!] In the third episode, Arya managed to end the big battle between the living and the Night King as well as his army of the Dead by stabbing him with a dragonglass blade. "It was so unbelievably exciting," she said. "But I immediately thought that everybody would hate it; that Arya doesn't deserve it."

"The hardest thing is in any series is when you build up a villain that's so impossible to defeat and then you defeat them. It has to be intelligently done because otherwise people are like, 'Well, [the villain] couldn't have been that bad when some 100-pound girl comes in and stabs him.' You gotta make it cool," she continued.

"And then I told my boyfriend and he was like, 'Mmm, should be Jon though really, shouldn't it?' "

Fans were not happy with how her boyfriend reacted to the scene, prompting them to do a cancel party against Ollie. "Maisie Williams's boyfriend is cancelled, effective immediately," one fan quipped on Twitter.

Echoing the same sentiment, another fan wrote, "Maisie Williams needs a new boyfriend #NotToday." Another comment read, "imagine being maisie williams and getting this incredible news abt ur character and the stroy and everything that it's built up to and this is how ur boyfriend reacts." 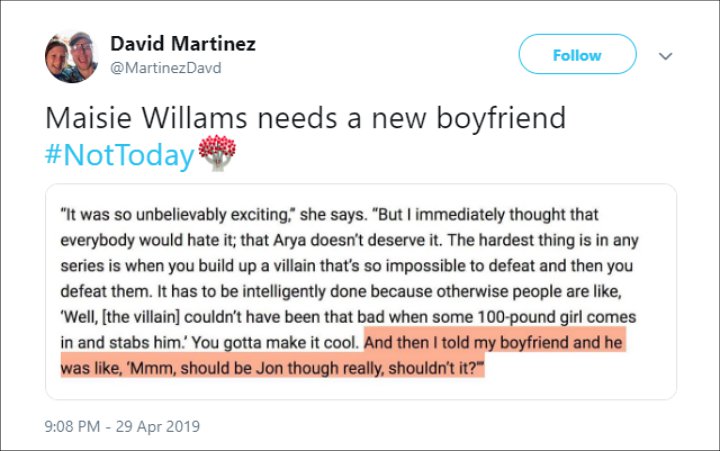 Fans blast Maisie Williams' boyfriend for his reaction over her character's big moment on 'Game of Thrones'.

"Maisie's boyfriend's remark is a perfect example of how women can execute things flawlessly and still some a**hole will be tripping over the idea that a man was more DESERVING of the clout," another remarked. "RIP to all the fragile male egos out there."

Meanwhile, Jon Snow depicter Kit Harington admitted that he was pleasantly surprised about the storyline. "I was surprised, I thought it was gonna be me!" he said. "But I like it. It gives Arya's training a purpose to have an end goal. It's much better how she does it the way she does it."

Maisie Williams Keen to Give Up London and Move to France